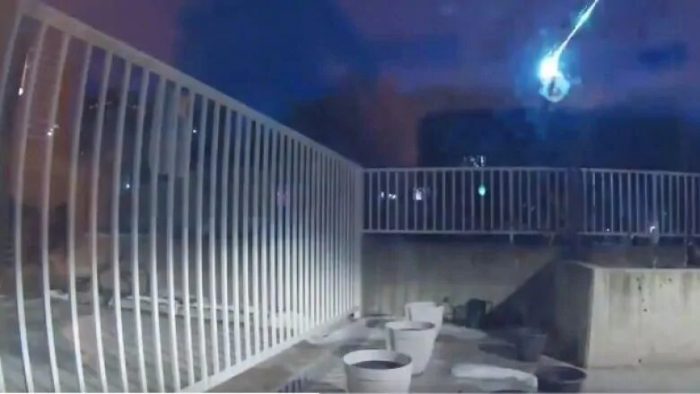 A fireball buzzed over the Prairies on Monday, temporarily piercing the dark of the early morning sky with a flash of blinding blue light.

The meteor darted across the sky around 6:30 a.m. MT, startling early risers who were lucky to catch a glimpse of the sudden glow.

The light was captured by security cameras across Edmonton, and social media soon lit up with reports from observers who caught a glimpse of it.

The spectacle was seen in at least two provinces, with scattered reports from Jasper to Saskatoon.

As of 8:30 a.m., there were 42 unverified reports of fireball sightings on the American Meteor Society (AMS) website.

One observer who filed a report described the fireball as a bright flash of white “brighter than when a car turns its light to you in the dark.”

Another reporter said the fireball emitted a light blue glow before turning orange, leaving behind a trailing smoke line of dark grey.

Lea Storry, an Edmonton-based writer, was sitting near the window of her home office in downtown Edmonton when she saw the flash. She captured the spectacle on her security camera.

What was that? #yeg #meteorite #stars #fallingstar pic.twitter.com/drUgZXdYXX

“I live in a 13-storey condo building and it seemed like somebody was shining a bright red light in my eye,” Storry said.

At first, she thought it was a police helicopter flying by, but then she saw the fireball.

“I’ve seen a couple of falling stars, but nothing ever that close and not so clear. So it’s definitely a first.”

Meteor may have made ground fall

Frank Florian — an astronomer and senior manager of the planetarium and space sciences at the Telus World of Science — was still in bed when the meteor fell but has seen numerous videos posted to social media.

He said the streak of light was created by an object as it entered Earth’s atmosphere.

“Some people call a falling star a shooting star, but when they get really, really bright — brighter than, say, the planet Venus does in our morning or evening sky, we call it a fireball,” Florian said.

Anyone else see the sky light up just a few minutes ago? Our security cameras caught it. Meteor? pic.twitter.com/f0fy0QcM0r

“Basically, there’s a larger piece of material falling through the Earth’s atmosphere and, at times, that material can basically burn up a little bit.

“Sometimes there might be pieces of it scattered somewhere around the countryside somewhere. If that’s the case, we can go out there and try to find some pieces of this rock, which we call a meteorite.”

Florian said astronomers will be poring over observer reports of the meteor to determine if any debris fell to Earth. Some of the reports indicate that the flash did make a sound and he said that’s a good indication it could have made ground fall.

That tells scientists that the meteor got down deep enough into Earth’s atmosphere that it likely fragmented and created “a bit of an air burst,” he said.

Florian described Monday’s meteor as “on the rare side” but noted that late winter and early spring is usually considered “fireball season,” with activity picking up in late February.

“During the spring months, we see more and more of these brighter meteors, these fireballs in the sky,” he said.

Scientists suspect that there is a large field of space rocks that Earth encounters on its orbit this time of year.

“Every time the Earth actually passes this part of its orbit in the solar system, we encounter a lot more material. And that stuff rains down on the Earth.”

He said most of it just burns up, but sometimes if a piece is big enough, it’s becomes visible.

“This might be the first of many that people might be able to see over the next few months.”

His advice to novice astronomers? Be sure to report the details of any anomalies spotted in the night sky to groups like the University of Alberta’s meteorite reporting system, and always keep your eyes peeled for anything unusual.

“Keep looking up,” he said. “You never know when one of these things is going to be seen in the sky.”

Did you catch footage of the possible meteor? Share your videos and photos with CBC Edmonton at [email protected]