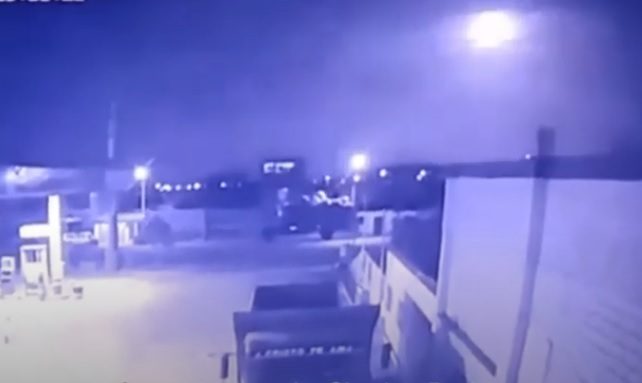 A security camera was able to capture a bright fireball as it illuminated its surroundings over a town in Peru. According to the reports submitted by the eyewitnesses, the meteor that hit Earth and created the fireball event was brighter than Venus.

The latest fireball event in Peru was reported via the International Meteor Organization (IMO). Based on the reports collected by the organization, at least two people in the country witnessed the fireball incident.

According to the reports filed by the eyewitnesses, the fireball appeared on April 16 at 1 a.m. UT, or on April 15 at 9 p.m. EDT. Based on their observations, the magnitude of the fireball ranged from -13 to -19. This means that the meteor produced a very bright illumination that was capable of lighting up its surroundings. It was also much brighter than the planet Venus when viewed from Earth, which has a magnitude of about -5.

An eyewitness named Miguel A. from the Lima Callao region stated in his report that the fireball remained in the sky for about 20 seconds. As it streaked across the sky, it produced different colors, including white, green and pink. After a while, the fireball began to break apart, producing around five to six fragments.

Diego A., an eyewitness from the town of Paracas in Ica, uploaded a video of the fireball even as part of his report. The footage was captured by the security camera of a water-front property. Although the video was not able to capture the exact meteor, it was able to show just how bright the fireball was.

The video was only about 16 seconds long and was focused on a section of a property. After a couple of seconds, a bright object in the sky illuminated the surrounding area. The object’s brightness was also reflected in the body of water in front of the property.

Based on the video and the eyewitness reports, the fireball event was most likely caused by a small asteroid that collided with Earth. As it entered Earth’s atmosphere, it became a fiery meteor that eventually broke apart due to intense heat and friction.

“Due to the velocity at which they strike the Earth’s atmosphere, fragments larger than 1 millimeter have the capability to produce a bright flash as they streak through the heavens above,” the IMO explained.