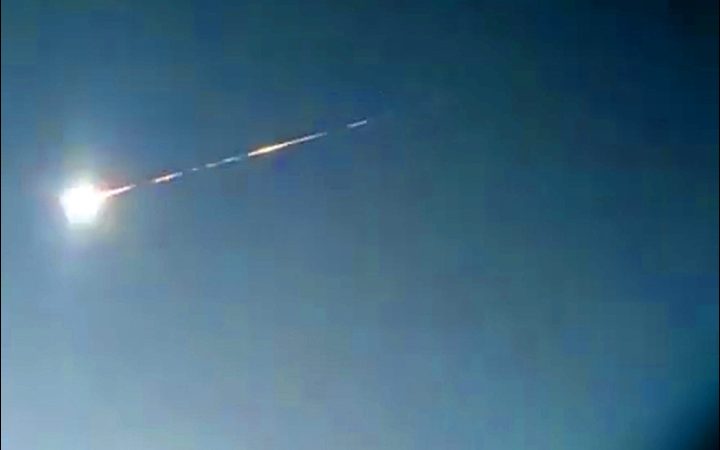 Bright and noisy with a long, sparkling green and yellow tail, it was filmed by multiple observers in Krasnoyarsk region.

The phenomenon caused fear on the ground.

‘I panicked as it sounded and looked like a plane on fire, I got really scared of the noise and shine it created’, said a local woman from Krasnoyarsk, the large industrial city.

‘I pulled a phone out of a pocket, but it flew across the sky so fast that I only caught a long white trace it left.’

Some residents said the meteor was blindingly bright, akin to the light and sparks created during intense welding work.

It split into several parts before disappearing in the sky somewhere over Irkutsk region, east of Krasnoyarsk.

The local ministry of emergencies confirmed it registered a meteor, and said that it didn’t pose a threat to people or infrastructure.

It is the third major meteor or meteorite event in four months.

On 18 December a meteor exploded close to Russia’s Kamchatka peninsula with a force ten times more powerful than the Hiroshima atomic bomb, according to NASA.

On 15 March a meteorite slammed into Krasnoyarsk region with local reports saying it ‘warmed the air’ and ‘shook the ground’ after streaking across the sky in a green, yellow and orange fireball.

This came down close to the site of the Tunguska Event in 1911 when a meteor exploded in the atmosphere wiping out 80 million trees, and with the estimated force of 185 Hiroshima bombs.

Expert Viktor Grokhovsky from Ural Federal University, studied the videos of the 6 April event and concluded that the recent space guest was a bolide.

‘It exploded quite high in the sky somewhere over Irkutsk region,’ he concluded.

‘It was a bolide that moved with a speed higher than the New Tunguska meteorite (LINK) from Evenkia.

‘Its structure must have been quite loose given that it split into fragments.’

The latest meteor incursion was spotted by dash cams and eye witnesses around 7 pm on 6 April.