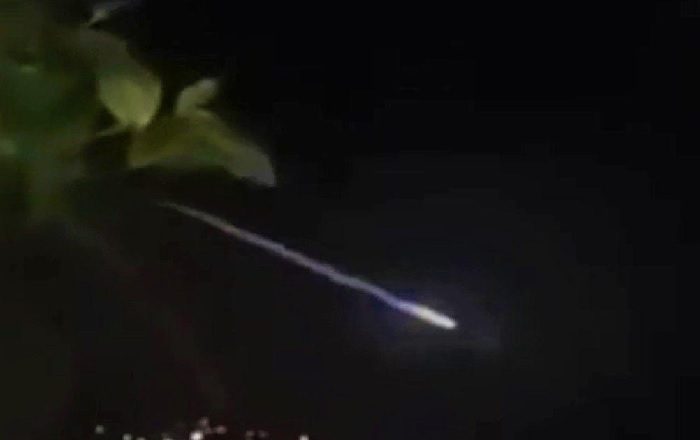 SOME lucky citizens were on Tuesday night treated to what appeared to be a meteor blazing its way into Earth’s atmosphere, looking much like a comet as it streaked across the sky.

The fireball appeared to have been visible mostly to those living in Central and Northern Trinidad and a number of people yesterday posted video clips of the celestial activity, accompanied by exclamations of wonder.

According to the Trinidad and Tobago Weather Centre, most people said the event took place between 9 p.m. and 10 p.m.

One video, recorded from a vehicle, also showed two smaller, round lights that at first appeared to be following the meteor, but many surmised that these were generated by the lens of the camera.

While “shooting stars” are commonly spotted, they are usually much smaller and burn up quickly.

The much larger object making its way across the local sky elicited a variety of comments.

Some were extremely pleased at the opportunity, while others joked that the object may have been the reviled “soucouyant” of local lore, an alleged vampire fabled to be an older woman who sheds her skin at night to stalk her victims.

Video of the Tuesday night’s Meteor, spotted from Morvant, Trinidad.

A meteor is the streak of light that you see in the sky when a small piece of cometary or asteroidal material enters the atmosphere at high speed and burns up because of the frictional heating from the piece’s collision with the atoms and molecules in the atmosphere.

Before the small bit of comet or asteroid enters Earth’s atmosphere, it floats through interplanetary space and is called a meteoroid.

Most meteoroids that enter the atmosphere burn up completely as meteors. In some cases, however, the meteoroid does not completely burn up, and the object actually makes it to Earth’s surface.

The chunk that has survived its fiery journey is called a meteorite. A small body starts its life as a meteoroid floating through space between the planets until it makes a bright streak of light in Earth’s atmosphere as a meteor and then, if it isn’t consumed by frictional heating, finally lands on the ground as a meteorite. (Source – britannica.com)