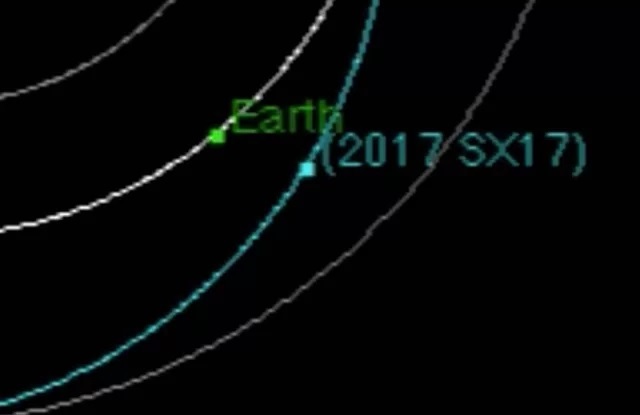 An asteroid about the size of a bus gave Earth a close shave this morning (Oct. 2), cruising well inside the orbit of the moon.

At the time of closest approach, 2017 SX17 was traveling at about 16,350 mph (26,310 km/h) relative to Earth, according to researchers at the Center for NEO (Near-Earth Object) Studies, which is based at NASA’s Jet Propulsion Laboratory in Pasadena, California.

2017 SX17 was discovered on Sept. 24, 2017. The asteroid has already been studied by several telescopes and observing campaigns, including the Steward Observatory and Mt. Lemmon Survey in Arizona and the Panoramic Survey Telescope and Rapid Response System (Pan-STARRS 1) at Haleakala Observatory in Hawaii.

Such observations have allowed researchers to determine that the space rock completes one lap around the sun every 467 Earth days.

As its name suggests, 2012 TC4 was first spotted five years ago. Astronomers have been tracking the space rock for weeks now, as part of an exercise to help find and follow asteroids that may pose a threat to Earth in the future. (2012 TC4 itself poses no threat until at least 2050.)

Astronomers have discovered nearly 17,000 near-Earth asteroids to date — a tiny fraction of the millions thought to lurk out there in our neck of the cosmic woods.