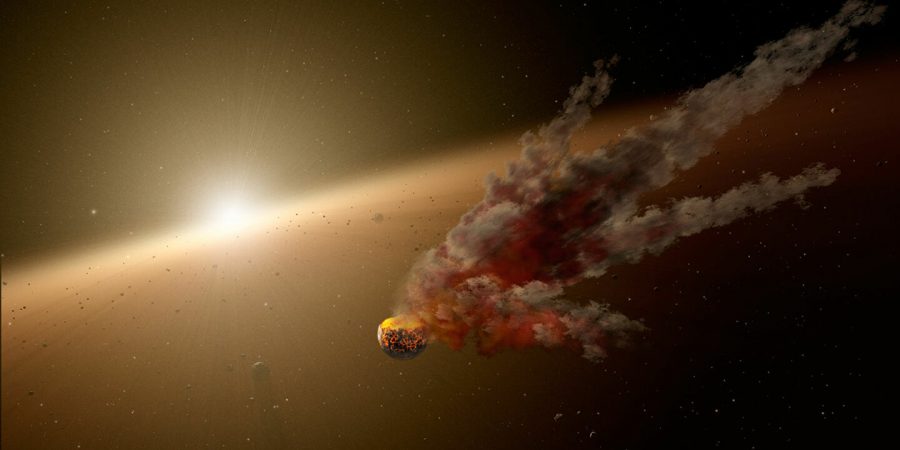 “Asteroids collide with Earth every day, but in most cases, they are small and burn up in the Earth’s atmosphere before reaching its surface. According to NASA, the possibility of a larger asteroid striking Earth is a “once a millennium type of event”. Yet, this does not mean that two similar events cannot occur even in the same year.”

The history of our planet has already seen devastating meteor strikes, including the one that hit Earth approximately 66 million years ago and is widely believed to have wiped out the dinosaurs. Numerous craters on Earth’s surface tell us that such strikes could occur from time to time, raising concerns of unpredictable damage.

Experts warn that the threat of dangerous collisions with celestial bodies persists, while there is still no country or agency that has been put in charge of tackling the threat, Politico reported Saturday.

Asteroids collide with Earth every day, but in most cases, they are small and burn up in the Earth’s atmosphere before reaching its surface. According to NASA, the possibility of a larger asteroid striking Earth is a “once a millennium type of event”. Yet, this does not mean that two similar events cannot occur even in the same year.

So far, calculations have shown that the current military arsenal of nations is unable to prevent a collision with a larger asteroid. Some smaller objects could be sprayed or cracked into fragments, but even these pieces would cause considerable damage.

“No one is tasked with mitigation”, said former Air Force space strategist Peter Garretson. “Congress did put in [a] law that the White House identify who should be responsible, but fully four subsequent administrations so far have blown off their request”.

Senator Gary Peters (D-MI), a member of the Armed Services and Commerce committees, also told Politico that a possible asteroid strike is among the “unique threats to national security”, and the US government needs to do more “to bolster federal planetary defence efforts”.

“There are three million asteroids and we have not a freaking clue where they are and they are flying around us”, said Danica Remy, president of the B612 Foundation, which is building a database to track near-Earth objects. “We’ve barely made a dent”.

Chris Mattman, the Chief Technology and Innovation Officer for the NASA Jet Propulsion Laboratory, reportedly shared with the New York Post that any potentially dangerous strike would likely involve “a whole of government effort” response.

As of today, scientists agree that the safest way to prevent a potential Armageddon is to “gently turn away” the asteroid from its trajectory towards Earth. To examine the efficiency of such tactics and assess the consequences, such a mission, also known as DART (Double Asteroid Redirection Test), is scheduled by NASA for 24 November.

The agency is set to launch a rocket travelling at a speed of 16,000 miles per hour at the asteroid Dimorphos, which is not a threat to Earth, but is nonetheless “a perfect testing ground to see if intentionally crashing a spacecraft into an asteroid is an effective way to change its course, should an Earth-threatening asteroid be discovered in the future”.

“The Didymos system is the ideal candidate for DART because it poses no actual impact threat to Earth, and scientists can measure the change in Dimorphos’ orbit with ground-based telescopes”, NASA said.

Why are we crashing a spacecraft into an asteroid more than 6 million miles away?

— NASA (@NASA) November 19, 2021
The mission has raised questions as to who should track and respond to potential threats. Astronomers have outlined several asteroids that pose the largest threat, the most dangerous of which until 2021 was considered Apophis (2004 MN4), whose diameter is about 325 metres. It was believed until this year that it could approach the Earth at a distance of about 31,000 kilometres, but scientists later reviewed the asteroid’s trajectory and found it to be less of a threat.

Observation is a key element of planetary defence, but tracking celestial bodies through a telescope limits the accuracy of the data. Another option is to mark an asteroid with a beacon that would enable its course to be tracked. In 2014, the Japanese space agency launched the Hayabusa-2 spacecraft into the orbit of the asteroid Ryugu, and two years later, the US launched the automatic interplanetary station OSIRIS-Rex into the orbit of Bennu (1999 RQ36), which landed on the asteroid in 2019.

Meanwhile, other experts have suggested that the US should not work alone on the issue of planetary defence.

“It is not a space race”, Thomas Jones, a planetary scientist and former astronaut, reportedly told Politico. “We can put together an international response. That’s the way to do this”.

Without international cooperation, there will be “disinformation and rivalries and wasted resources”, Jones warned.

Namrata Goswami, an author of “Scramble for the Skies”, also warned about a potential arms race in space, saying that “if China jumps ahead of the US in regard to planetary defence, it will be a game-changer”.