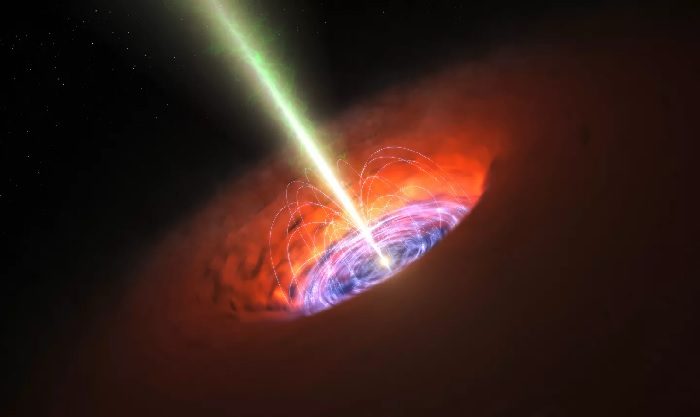 “The mass of each of the supermassive black holes is hundreds of millions of times that of our Sun.”

According to the press release, two massive black holes, nearly 9 billion light-years out in deep space, rotate around each other every two years. The mass of each of the supermassive black holes is hundreds of millions of times that of our Sun.

Furthermore, the two bodies are relatively close, with a distance of only 1,950 astronomical units (roughly 50 times that of our Sun and Pluto). The two bodies are due to collide in about 10,000 years, which is just a moment in the universe’s history, in a collision so powerful that it will send gravitational waves across the fabric of space and time.

PKS 2131-021, the quasar observed in the current study, published in The Astrophysical Journal Letters, belongs to a subclass of quasars known as blazars, which have a jet pointed toward Earth. Quasars are known to have two supermassive black holes surrounding them, but obtaining direct proof of this has been challenging, according to the scientists.

Moreover, PKS 2131-021 (detected from observations dating back 45 years) is now the second known possibility for a pair of supermassive black holes in the process of merging. Within a quasar known as OJ 287, the first candidate pair orbits each other at a greater distance, looping every nine years rather than the two years it takes the PKS 2131-021 pair to complete an orbit.

Although galaxy mergers are widespread, the authors claim that “there are relatively few instances of two galaxies with supermassive black holes (SMBHs) in their nuclei being seen in the actual process of the merging.”

One of the study co-authors, Tony Readhead, Robinson Professor of Astronomy, Emeritus described the findings as a “good detective novel,” given that they had been monitoring the brightness of over 1,000 blazars when they came upon an unusual case in 2020.

“PKS 2131 was varying not just periodically, but sinusoidally,” Readhead says. “That means that there is a pattern we can trace continuously over time.”

Then, the team asked themselves whether there was observation data on this quasar from before 1980 to prove or disprove a pattern in its motion.

“The story would have stopped there, as we didn’t realize there were data on this object before 1980,” Readhead said. “But then Sandra [O’Neill, lead author of the study and an undergraduate student at Caltech] picked up this project in June of 2021. If it weren’t for her, this beautiful finding would be sitting on the shelf.”

Most, if not all, galaxies, including our own Milky Way, have massive black holes at their centers. When galaxies collide, their black holes “sink” into the newly created galaxy’s center, eventually merging to form an even more enormous black hole.

As the black holes spiral closer to one other, they disrupt the fabric of space and time, causing gravitational waves, which was first predicted by Albert Einstein more than a century ago.