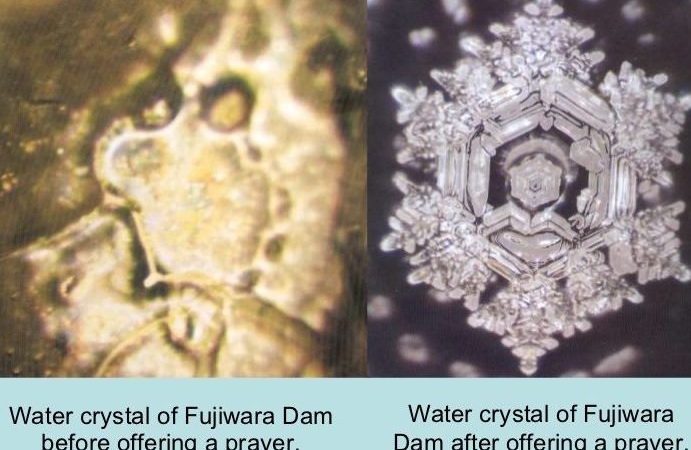 “The day science begins to study non-physical phenomena, it will make more progress in one decade than in all the previous centuries of its existence.” – Nikola Tesla

This is exactly what’s happening right now, and it’s making its presence felt in all levels of academia. But we still have a lot way to go. Fortunately, a group of internationally recognized scientists have come together to stress the importance of what is still commonly overlooked in the mainstream scientific community: the fact that matter (protons, electrons, photons, anything that has a mass) is not the only reality. We wish to understand the nature of our reality, but if we only examine physical systems and ignore all the rest – things like consciousness, and the way it interacts with matter – we’ll never be able to.

There are hundreds of published peer-reviewed publications showing statistically significant results for this type of science, yet unfortunately, it is still shunned by mainstream academia, even though so many mainstream academic scientists support it. What is going on here?

The idea that the mind affects physical material reality is not trivial, and it’s been demonstrated repeatedly with statistically significant results through fascinating research undertaken by government programs, places like the Institute of Noetic Sciences (founded by Dr. Edgar Mitchell), and, in more recent developments, the group of internationally recognized scientists mentioned above.

Why would these scientists – people working at the highest level of government – be studying this type of science if there was absolutely no validity behind it?

The implications of this type of science are far reaching, and in the opinion of many, far greater than those of material science. Don’t be fooled; material science has been integral to the advancement of humanity, but non-material science is truly our next step. Human thoughts, feelings, emotions, perceptions, consciousness, and more are all intertwined with what we perceive to be our physical material reality.

The science of consciousness is the backbone of quantum mechanics (QM), the discipline that challenges the current, assumed material foundations of what we call reality.
“I regard consciousness as fundamental. I regard matter as derivative from consciousness. We cannot get behind consciousness. Everything that we talk about, everything that we regard as existing, postulates consciousness.” – Max Planck, theoretical physicist who originated Quantum Theory, which won him the Nobel Prize in Physics in 1918
Human Thought and Water

Experiments over the past four decades have investigated whether human intention alone can affect the properties of water. This question has been of interest to alternative medicine research, because the human body is made up of approximately 70% water. Interest in this topic has been rekindled recently by multiple researchers suggesting that intentionally influenced water can be detected by examining ice crystals formed from samples of that water. Scientists have hypothesized and shown that water influenced by intention can indeed influence the physical formation of the ice crystals that water produces. Consistent results commonly point to the idea that positive intentions tend to produce symmetric, well-formed, aesthetically pleasing crystals, and negative intentions tend to produce asymmetric, poorly formed, and unattractive crystals.

Dean Radin, the Chief Scientist at the Institute of Noetic Sciences, along with Masaru Emoto, Takashige Kizu, and Nancy Lund, designed an experiment that tested this hypothesis.

As the study’s description reads:

Over three days, 1,900 people in Austria and Germany focused their intentions towards water samples located inside an electromagnetically shielded room in California. Water samples located near the target water, but unknown to the people providing intentions, acted as ”proximal” controls. Other samples located outside the shielded room acted as distant controls. Ice drops formed from samples of water in the different treatment conditions were photographed by a technician, each image was assessed for aesthetic beauty by over 2,500 independent judges, and the resulting data were analyzed, all by individuals blind with respect to the underlying treatment conditions. Results suggested that crystal images in the intentionally treated condition were rated as aesthetically more beautiful than proximal control crystals (p < 0.03, one-tailed). This outcome replicates the results of an earlier pilot test. You can access the full study here. 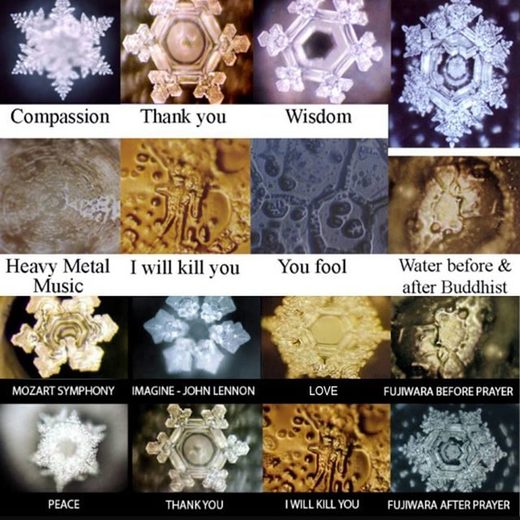 One of the previously mentioned studies was conducted in the 90s by Masaru Emoto, co-participant in the study used in this article. He came up with the idea to freeze water and observe it with a microscope. At first, he observed crystals of tap water, river water, and lake water. From the tap water he could not get any aesthetically pleasing crystals that were unique in design, not even from rivers or lakes that surrounded big cities. However, water from more isolated rivers and lakes produced unique and beautiful crystals.

The results from this earlier study (among others) also showed that the shape and physical structure of water crystals changed after “giving good words, playing good music, and showing, playing, or offering pure prayer to water.” Disfigured crystals were also observed when creating the opposite situation. You can request photos and even view some of them here.

Below is a clip from What The Bleep Do We Know, a 2004 documentary that combines a number of factors demonstrating a connection between quantum physics and consciousness, and mentions Emoto’s research with intention and water. It features prominent scientists and researchers and has won several independent film awards.

Emoto’s work has been criticized before, and harshly. This type of research directly contradicts the belief systems of many scientists, and that’s largely because the assumptions of material science have transformed into dogmas and instilled the belief that the mind is nothing but the physical activity of the brain, and that our thoughts cannot have any effect upon physical structures, or the physical world. That’s why the re-published study, presented above, is so important, because it came after the criticisms and was a replication of Emoto’s work.

I’d like to mention before concluding that the mind-body connection is also a great area to dive into, and one example of many where consciousness alters physical systems.

The placebo effect is another fantastic, and proven, example.

Perhaps this is why more and more people are gravitating toward alternative forms of medicine. As Garth Cook from Scientific American points out:
A growing body of scientific research suggests that our mind can play an important role in healing our body – or in staying healthy in the first place. . . There are now several lines of research suggesting that our mental perception of the world constantly informs and guides our immune system in a way that makes us better able to respond to future threats. That was a sort of ‘aha’ moment for me – where the idea of an entwined mind and body suddenly made more scientific sense than an ephemeral consciousness that’s somehow separated from our physical selves.

In 1999, a statistics professor at UC Irvine published a paper showing that parapsychological experiments have produced much stronger results than those showing a daily dose of aspirin helps prevent a heart attack. She also showed that these results are much stronger than the research behind various drugs like antiplatelets, for example.

Human thought, feelings and emotions have the power to change our world, and are a necessary component behind our actions that will help bring that change into fruition.

For a selected list of downloadable peer-reviewed journal articles reporting studies of psychic phenomena, and how intentions, thoughts, and feelings can alter physicality, mostly published in the 21st century, you can click here.