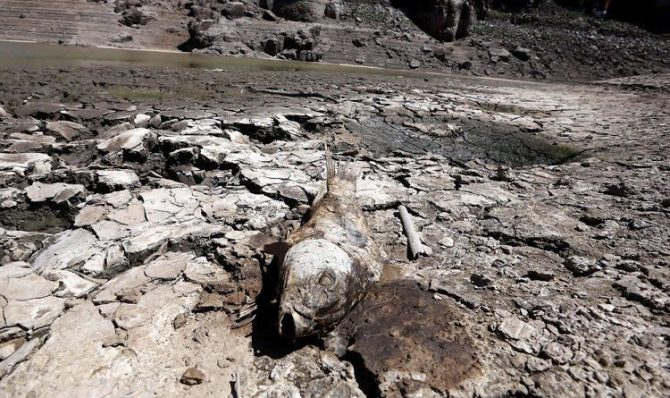 As the clock struck midnight on Jan. 1, residents of Cape Town, South Africa, ushered in 2018 – the start of a new year and the start of the city’s stringent new water regulations.

The Level 6 restrictions came into effect to combat an unprecedented drought which threatens to make Cape Town the first major city devoid of water.

The slew of new measures include limiting individuals municipal water usage per day and threatening to impose fines on those who exceed it.

They also reduce agricultural water use by 60 percent and commercial use by 45 percent, compared to pre-drought allocations.

The drought and water stress across most of South Africa follows a strong El Niño in 2015 and 2016.

The weather pattern – characterized by warmer-than-normal ocean water in the equatorial Pacific – resulted in extreme heat and spells of dry weather.

Beneficial rain eventually returned in late fall for much of the country, including the drought-stricken western Cape.

But according to the South Africa Water and Sanitation Department, it failed to restore the water supply in the country’s dams.

“Instead, the levels continued their slide week-on-week,” they said in a November media statement.

Soaring temperatures in between spells of rain meant a high rate of evaporation and usage, resulting in sinking water levels in dams.

“The average high in December for Cape Town is in the upper 70s, but there were 13 days in December when the temperature rose into the 80s or higher,” AccuWeather Senior Meteorologist Kristina Pydynowski said.

“Unfortunately, Cape Town is in the midst of its dry season and will continue to have more warm days than rainy days this summer,” she said.

As of Dec. 18, the combined level of dams supplying the city was at a mere 31 percent of capacity.

At the current rate of consumption, officials warn April 29, 2018 will become Day Zero, the day the city’s taps will be turned off.

“The city of Cape Town could conceivably become the first major city in the world to run out of water, and that could happen in the next four months,” Dr. Anthony Turton, professor at the Centre for Environmental Management at the University of the Free State, told the New York Times.

“It’s not an impending crisis – we’re deep, deep, deep in crisis,” he said.

In addition to enforcing restrictions, the government has signposted water conservation notices throughout the city.

Restrooms and airports are plastered with posters, reading “If it’s yellow, let it mellow” and “Slow the flow: Save H20.”

But not everyone is making a concerted effort, Cape Town resident and travel blogger Kerry Kopke told AccuWeather.

“The problem is that water saving is a shared collective responsibility relying on trust that everyone will do their bit to conserve water, but we are all acting as individuals. How do you actually know what your friend, family or neighbour is doing to save water on a day-to-day basis,” she said.

The peak of tourist season further complicates the problem.

Tourism accounts for more than 9 percent of South Africa’s gross domestic product. Though not all of it comes from Cape Town, it’s a significant part of the equation.

Many have called on the government to do more to stress the importance of conservation, but educating potential visitors without discouraging them from coming is a tough balance to strike.

Airlines arriving in Cape Town have been asked to make announcements about the drought upon landing, but according to the the city’s executive mayor Patricia de Lille, it can’t be enforced.

“[Tourists] may have heard about [the drought] but they don’t realise how severe the crisis is and that the onus is also on them to save water,” Kopke said.

“But think about it. If you were coming on a holiday to an amazing international destination, having spent thousands of dollars of your hard-earned money to get there, would you really want to stand in a shower for two minutes with a bucket under you and use that bucket to flush the toilet?”

You might wanna give this a read: Pentagon: Dystopian Future ‘Unavoidable’ For World’s Biggest Cities