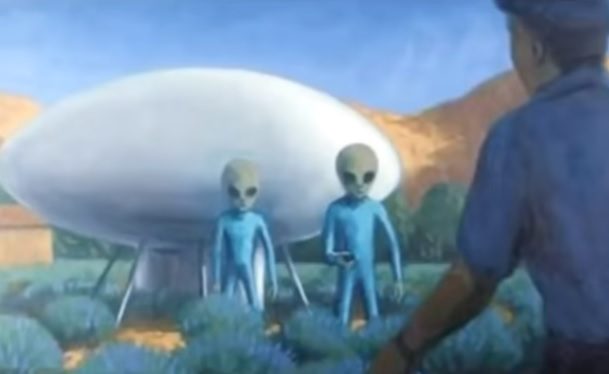 Near the French village of Valensole, farmer Maurice Masse was smoking a cigarette just before starting work at 5:45 A.M. on July 1, 1965, when an object came out of the sky and landed in a lavender field 200 feet away.

Annoyed and assuming that a helicopter had made an unauthorized landing, he goes toward it. However, as he gets closer to it he realizes it was no helicopter but an oval-shaped structure resting on four legs. In front of it stood two figures, not quite four feet tall, dressed in tight gray-green clothes.

Their heads were oversize and with sharp chins, their eyes were large and slanted, and they were making a “grumbling” noise.

One of the beings reportedly pointed a pencil-like device at Masse, paralyzing him in his tracks. The figures entered the UFO and flew away, and the witness needed 20 minutes to recover his mobility.

In its wake the object left a deep hole and a moist area that soon hardened like concrete. Plants in the vicinity decayed, and analysis found a higher amount of calcium at the landing site than elsewhere.