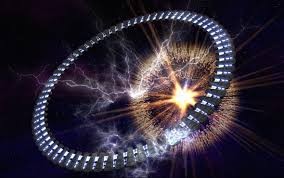 CERN Hadron Collider Revealed! The Interview You Must See!
Join Dark Journalist as he welcomes back Oxford Scholar and author of the popular Giza Death Star book series Dr. Joseph P. Farrell. His latest book, The Third Way: The Nazi International, European Union and Corporate Fascism, explores the deep political roots and global dangers of the controversial particle physics experiment by CERN called The Hadron Collider, which was set up in Geneva, Switzerland with a massive military style budget of over six billion dollars!

Dr. Farrell’s research exposes CERN’s official story of the so-called “Atom Smasher” Hadron Collider Project, as being ostensibly created for peaceful scientific experiments in particle physics, and reveals that it is actually a dangerous advanced technology project set up for secret military purposes and is seeking the ability to manipulate matter on a galactic scale and possibly even open dimensional doorways.

Strangelets Danger
He cites the massive disturbances in the magnetosphere of the earth when the Hadron Collider is turned on and outlines that it may have serious consequences for physical life on earth and a major impact on the rotation of the planet itself. We also will discover that voices in the scientific community have raised objections that CERN is unsafe due to the potential development of “Strangelets” a distorted potential byproduct of the matter smashing experiments that have been compared to mini black holes that suck in all dense matter and energy. He also shows the undeniable similarity between the CERN Hadron Collider and a Nazi Physics project called The Bell” that was an underground Torsion Physics project built by slave labor and overseen by the top Nazi Scientists to give them a master weapon to rule the world!

Deep State Nazi Connections
Dark Journalist and Dr. Farrell investigate the history of CERN and demonstrate clear links of a post-war Nazi International through the figure of John J. McCloy , lawyer for notorious German corporate conglomerate IG Farben. McCloy was also the Chairman of the Council on Foreign Relations and became the American High Commissioner for post World War II Germany. In a controversial action, McCloy helped clear and vet over 70,000 Nazis (yes, 70,000!) helping to utilize their intelligence networks to set up the CIA.

One of the major figures that he cleared was top Nazi legal theorist and prisoner of war Dr. Walter Hallstein who was eventually responsible for helping to set up CERN and who was also a key architect for developing the the Nazi plan for a European Federation that was eventually adopted as the blueprint for the European Union. McCloy, in a strange twist, also served on the Warren Commission to whitewash any Deep State connections to the JFK Assassination. JFK was famously committed to “Smashing the CIA into a thousand pieces” as a way to root out the Nazi infiltration of the agency and regain control over the government from suspected Nazi collaborators like CIA director Allen Dulles.