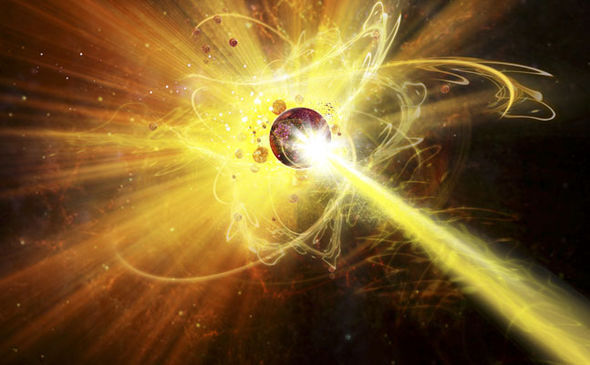 NEW super high-energy experiments at the CERN Large Hadron Collider (LCH) could have been responsible for the huge earthquakes that struck in Italy in August and this month, a shock new theory claims.

Videos uploaded to YouTube claim the Awake experiment, being piloted by CERN at the LHC in Geneva, could have triggered the quakes that killed more than 200 people in central Italy in August, and destroyed buildings in a similar area this month.

The LHC, run by the European Organisation for Nuclear Research (CERN) in Geneva on the French-Swiss border, is the world’s largest and most powerful machine and used to collide particles at close to the speed of light in a bid to discover more about physics and the possibility of parallel universes.

The Awake experiment is exploring the use of plasma to accelerate particles to high energies over distance.

According to a diagram on CERN’s website Awake will involve sending plasma from the Large Hadron Collider underground 250 miles to the Gran Sasso nuclear physics laboratory in Italy.

The first test beams to test Awake were fired in late June.

In one BP Earthwatch video, the narrator said: “They have upped the game.

“We have been talking about this since the earthquakes started over in Italy.

“Now Awake is up and running now – for how long we don’t know.”

Referring to the CERN diagram, he added: “The diagram shows from top right to bottom left, the quakes were right in the area.

“If you drew a straight line coming into the bottom of the image, that the underground laboratory down in Italy is in direct line to these quakes.”

In an earlier video after the August quake, he said of Gran Sasso: “This is a particle physics lab located near where the earthquake struck.

“Guys if you don’t think this can happen you have got to go back and look at what they have been doing over the years – look at CERN, it shut down for a few hours after the quake.”

While many viewers said they were bamboozled by the BP Earthwatch theory, it seemed to have convinced others.

He blogged on website ufosightingsdaily.com: “In the video BPEarthWatch states that there is a link between the current earthquakes in Italy and the CERN collider activity.

“I personally believe this to be true.

“It looks like CERN is purposely trying to create a stargaze, but the planet will suffer earthquakes in their failures.

“Sure a stargaze would be a way from one planet to another in a blink of an eye.

“This kind of technology could allow humans to use it as a portal to gather resources, meet other species and even conquer them, or just populate a new planet.

“It also allows aliens to come in from the other side to conquer us.”

It is not the first time CERN has been accused of causing earthquakes by conspiracy theorists.

There were claims the LHC triggered a magnitude seven earthquake in Vanuatu, in the south Pacific which was so strong it was described as “shaking the planet”, in April.

They claimed the quake, in Norsup on Malakula Island, started just 15 minutes after the last burst of energy into the LHC, which then shut down.

The official line from CERN was that a weasel gnawed through a 66-kilovolt power cable on the LCH, which forced it to shut down.

But, a growing number of conspiracy theorists believe it was an emergency situation and had to be locked down amid fears the earthquakes could spread and get even stronger.

A number of other conspiracy theorists believe the LHC has been causing quakes since it was first turned on.

There are even claims it was responsible for the devastating Nepal earthquake of April 2015 in which around 8,000 people perished and 21,000 were injured.

However, the earthquake theory is just one of many put forward by conspiracy theorists, about the risks it poses.

The curious machine, developed across a 16-mile ring of superconducting magnets, has has previously had critics who claimed it could inadvertently create a black hole that may swallow up the world.

Other theories include its potential to pull an asteroid into the planet, and even that it is run by illuminati scientists, hell bent on opening a portal to bring the devil back to Earth.

None of the above, however, are scientifically proven.

CERN has issued a statement on its website hitting back at some of the wilder claims.

It disputes the LHC is dangerous at all.

The statement said: “Although powerful for an accelerator, the energy reached in the LHC is modest by nature’s standards.

“Cosmic rays – particles produced by events in outer space – collide with particles in the Earth’s atmosphere at much greater energies than those of the LHC.