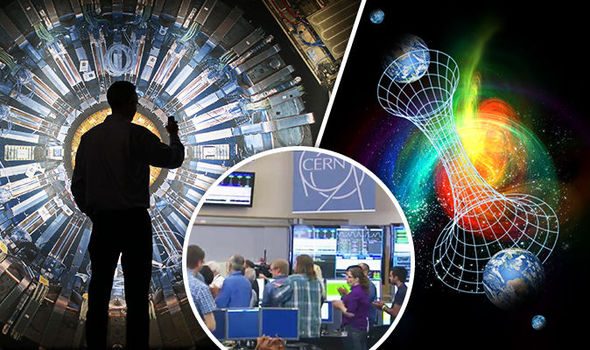 ELUSIVE dark matter, the mysterious substance believed to make up 85 per cent of all matter in the universe, could finally be identified by the Large Hadron Collider (LHC), a scientific paper has claimed.

A study by the University of California, Irvine, published in the journal Physical Review Letters, has suggested there may be a fifth force of nature that could be found by the Large Hadron Collider in Geneva.

“If confirmed by further experiments, this discovery of a possible fifth force would completely change our understanding of the universe, with consequences for the unification of forces and dark matter.”

Mr Feng and colleagues looked at data obtained from recent experiments by nuclear physicists at the Hungarian Academy of Sciences, who had been trying to find “dark photons” — hypothetical indicators of mysterious dark matter.

Dark matter is hard to detect because it neither absorbs nor emits light, and so far its existence has only been inferred its existence from its gravitational effects on “normal” matter.

Hungarian experiments found evidence of an unknown particle 30 times heavier than an electron.

Mr Feng said: “The experimentalists weren’t able to claim that it was a new force.

“They simply saw an excess of events that indicated a new particle, but it was not clear to them whether it was a matter particle or a force-carrying particle.”

The Feng research concluded that the Hungarians’ finding was not a “dark photon” but a “protophobic X boson”.

This particle could indicate a fifth force of nature.

Co-author Timothy Tait said: “There’s no other boson that we’ve observed that has this same characteristic.

“Sometimes we also just call it the ‘X boson,’ where ‘X’ means unknown.”

Mr Feng said the fifth force may be linked to electromagnetic and strong and weak nuclear forces, as “manifestations of one grander, more fundamental force.”

Most interestingly, he said it was possible that parallel to the the universe of “normal” matter, there was a parallel “dark” sector, with unique matter and forces.

He said: “It’s possible that these two sectors talk to each other and interact with one another through somewhat veiled but fundamental interactions.

“This dark-sector force may manifest itself as this protophobic force we’re seeing as a result of the Hungarian experiment.

“In a broader sense, it fits in with our original research to understand the nature of dark matter.”

The team admits its research is preliminary and more tests are needed using the LHC, as it could have been a “statistical fluke”.

Mr Feng added: “Because the new particle is so light, there are many experimental groups working in small labs around the world that can follow up the initial claims, now that they know where to look.”

According to the paper the new particle “may be accessible to near future LHC searches.”

The LHC, run by the European Organisation for Nuclear Research (CERN) at Geneva on the French-Swiss border, is the world’s largest and most powerful machine and used to collide particles at close to the speed of light in a bid to discover more about physics and the possibility of parallel universes.

The curious machine developed across a 16-mile ring of superconducting magnets has had critics before amid claims it could inadvertently create a black hole that may swallow up the world, something CERN vehemently denies.