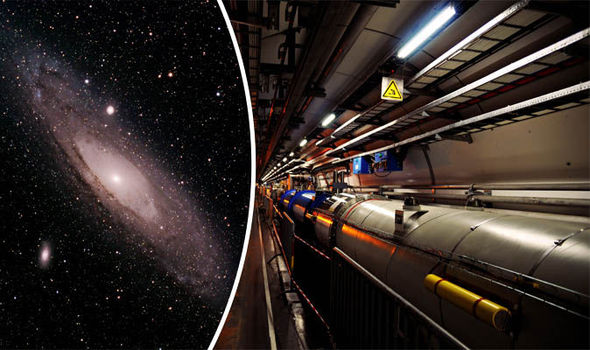 A NEW scientific theory which claims an almost infinite number of alternative universes are lined up alongside each other like a packet of cheese slices, is being tested by the Large Hadron Collider.

Scientists are searching for proof of the baffling ‘brane’ theory (short for membrane) which says a series of ‘two-dimensional’ universes may be only microscopic distances from ours – and they may be contactable, or even act as doorways from one to the other.

The brane concept is a spin-off from the equally mind-bending string theory, which says a series of almost incomprehensibly small vibrating strings are the substance behind everything from light to gravity to mass – everything in the universe basically.

Oh and they exist in nine dimensions.

Anything above the three usual dimensions (and perhaps the fourth, time) are easy for mathematicians to work with but almost impossible for the human brain to conceive of or to prove with hard evidence.

But, buoyed by the successful physical discovery of Higgs Boson – which had only been a piece of maths on a blackboard for decades – hard evidence of branes is exactly what the scientists at the Cern atom-smasher are looking for.

Theoretical physicist and author Christophe Galfard, who has researched with Stephen Hawking, said the branes were the most impressive alternate universes science had so far come up with and added: “They can be of many different dimensions, and they can all turn into one another and act like strings themselves.”

He suggested energy leaked from our universe to others and that it was likely black holes were the source of the leak “through a tube of distorted space time.”

He added: “You suddenly wonder if, by any chance there might be other people living in those other branes.

“Could black holes be a passage between your world and theirs.”

She added: “These heavier versions of particles – called Kaluza-Klein states – would have exactly the same properties as standard particles (and so be visible to our detectors) but with a greater mass. Such heavy particles can only be revealed at the high energies reached by the Large Hadron Collider.”