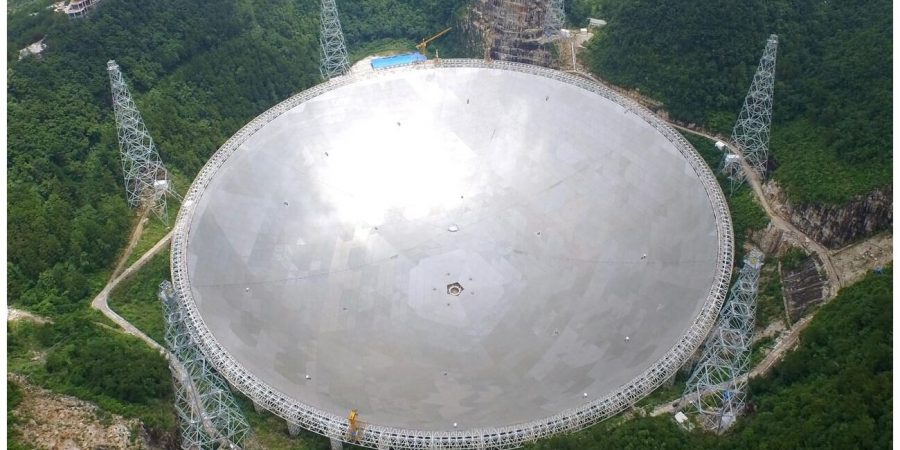 “”These are several narrow-band electromagnetic signals different from the past, and the team is currently working on further investigation,” Zhang Tongjie, head scientist at the China Extraterrestrial Civilization Research Group at Beijing Normal University…”

Scientists have yet to rule out human radio interference as the signals’ source.

China is claiming that its enormous “Sky Eye” telescope may have picked up trace signals from a distant alien civilization, according to a recently posted and subsequently deleted report by Chinese scientists.

Astronomers at Beijing Normal University have discovered “several cases of possible technological traces and extraterrestrial civilizations from outside the Earth,” according to a report published Tuesday (June 14) in Science and Technology Daily, the official newspaper of China’s Ministry of Science and Technology.

The signals were picked up by China’s Five-hundred-meter Aperture Spherical radio Telescope (FAST), nicknamed “Sky Eye,” which is the largest radio telescope in the world. Sky Eye was put to work scanning deep space for radio signals that could indicate extraterrestrial life in 2019; sifting through that data in 2020, the researchers said they spotted two suspicious narrow-band, potentially artificial radio signals. Then, in 2022, a targeted survey of known exoplanets found another strange narrow-band radio signal, bringing the tally up to three.

As the signals are narrow-band radio waves typically only used by human aircraft and satellites, they could have been produced by alien technology. However, the scientists say their findings are preliminary and should be taken with caution until the analysis is complete.

“These are several narrow-band electromagnetic signals different from the past, and the team is currently working on further investigation,” Zhang Tongjie, head scientist at the China Extraterrestrial Civilization Research Group at Beijing Normal University, told the Science and Technology Daily. “The possibility that the suspicious signal is some kind of radio interference is also very high, and it needs to be further confirmed and ruled out. This may be a long process.”

Following its publication, the report quickly began to circulate on the Chinese social media network Weibo and was picked up by a number of other state-run outlets. The reasons behind its sudden deletion are unclear.

The signals aren’t the first time that scientists have been baffled by radio waves from deep space. In August 1977, a SETI (Search for Extraterrestrial Intelligence) search performed by the Ohio State University’s Big Ear telescope picked up an incredibly strong, minute-long, electromagnetic burst that flared at a frequency scientists suspected could be used by alien civilizations. Upon spotting the signal on a data printout, the scientist working with the telescope that night, Jerry Ehman, hastily scribbled “Wow!” in red pen on the page, giving the detection its famous name.

Follow-up searches in the same region of space have all returned empty-handed, and later research has suggested that the signal could have come from a sun-like star located in the constellation Sagittarius, Live Science previously reported. Nonetheless, the signal’s source is still a mystery.

Chinese astronomers are keen to rule out radio interference because it has famously waylaid alien-hunting scientists in the recent past. In 2019, astronomers spotted a signal beamed to Earth from Proxima Centauri — the nearest star system to our sun (sitting roughly 4.2 light-years away) and home to at least one potentially habitable planet.

The signal was a narrow-band radio wave typically associated with human-made objects, which led scientists to entertain the exciting possibility that it came from alien technology. New studies released two years later, however, suggested that the signal was most likely produced by malfunctioning human technology, Live Science previously reported. Similarly, another famous set of signals once supposed to have come from aliens, detected between 2011 and 2014, turned out to have actually been made by scientists microwaving their lunches.
Tonjie has added that his team is planning to take repeat observations of the strange signals to conclusively rule out any radio interference and obtain as much information about them as possible.

“We look forward to the [FAST telescope] being the first to discover and confirm the existence of extraterrestrial civilizations,” Tongjie told the Science and Technology Daily.

The discrepancy between the universe’s scope and age and the apparent lack of intelligent life-forms beyond Earth — called the Fermi Paradox — has long troubled scientists. The paradox takes its name from the casual lunchtime musings of Nobel Prize-winning physicist Enrico Fermi, who, after contemplating the conundrum, is famously said to have remarked “so where is everybody?”