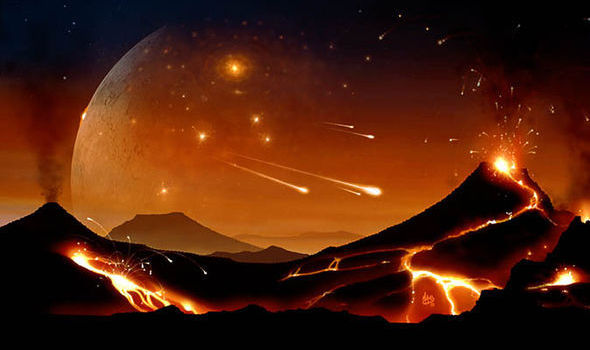 A VERSE in the Bible proves that the end of the world is nigh on September 23, Christians have shockingly claimed.

The quote, which allegedly has a code that matches with events from the eclipse onwards, is found in Luke 21: 25 to 26.

Christian numerologists claims the Bible numbers match with August 21, the date of the Great American Solar Eclipse, August 25 when Hurricane Harvey hit, and August 26, when it flooded Houston in Texas.

Chuck Campbell wrote in an article entitled “the end of the world will be Sept 23? Seems legit”, which was published on Knoxnews.com: “One popular Bible quote currently making the rounds as evidence is Luke 21: 25-26, which says:

“25: There will be signs in the sun, moon and stars. On the earth, nations will be in anguish and perplexity at the roaring and tossing of the sea. People will faint from terror, apprehensive of what is coming on the world, for the heavenly bodies will be shaken.’

“’26: Men’s hearts failing them for fear, and for looking after those things which are coming on the earth: for the powers of heaven shall be shaken.’

The alleged Biblical prophecy is said to confirm an earlier one which has gives the date of September 23 as the start of our downfall before the Rapture and second coming of Christ.

Scores of YouTube doom videos and evangelical websites point to an astrological constellation on September 23 matching Revelation 12:1–2, which will signal the start of the Rapture and second coming of Christ:

The passage 12:1–2 reads: “And a great sign appeared in heaven: a woman clothed with the sun, with the moon under her feet, and on her head a crown of 12 stars. She was pregnant and was crying out in birth pains and the agony of giving birth.”

Conspiracy theorists claim the woman in question is Virgo, and on September 23, the sun and moon will be in Virgo, as will Jupiter, now being said to represent the Messiah.

This happens every 12 years, but they claim because of another planetary alignment, representing “the Lion of the tribe of Judah”, it is an unprecedented event foretold in scripture.

Before going into Virgo, the sun will be in Leo, at the same time as Mercury, Venus, and Mars are in Leo.

One main purveyor of the theory is Christian conspiracy theorist David Meade, who also predicts a mythological planetary system known as Planet X or Nibiru will appear in the sky on September 23.

He claims it will then pass the Earth in October, causing the start of the Rapture with huge volcanoes and volcanic eruptions due to its gravitational force.

However, not all Christians hold in with the prophecy, and have a much more rational take on September 23.

In an article entitled “Will the World end on 23 September?” Jonathan Sarfati wrote that the same planetary coincidence had happened four times in the last millennium, and therefore was not as rare as is being suggested.

He said: “As usual with any astrology (or Christian adaptations of it), one cherry-picks the stars that fit the desired conclusion.

“There is nothing to suggest that 23 September is a momentous date for biblical prophecy, and Christians need to be careful about being drawn into such sensationalist claims.

“We won’t know the day or the hour—so we should be prepared at all times!”

Fortunately for us, NASA also says the Planet X theory is a hoax, and no such system exists or will pass the Earth.