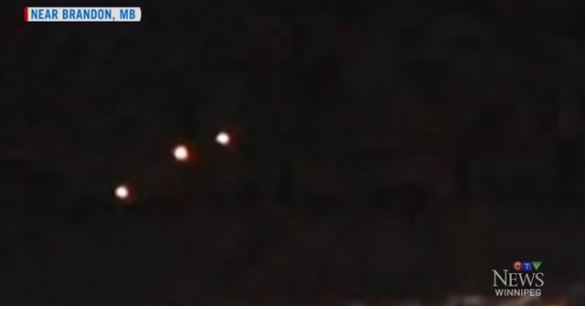 What’s up in Brandon? Some say UFO sightings. Locating near the U.S. border with North Dakota, it’s the second largest city in Manitoba, just 200 km (120 miles) from Winnipeg, one of the recognized UFO sightings hot spot in Canada. Perhaps there’s a little intercity rivalry going on here as a report about mysterious lights seen recently over Brandon prompted news coverage in Winnipeg and brought out stories of other sightings over the past few years.

I am shaking right now. It is crazy. They followed me along the highway. I can’t believe I am holding the camera this steady.

According to various sketchy reports and a newscast on CTV Winnipeg, the anonymous witness claims he recorded the lights (uploaded on November 26th) over a highway in Brandon and was followed by them for 20 km (12 miles). What happened then? How did he know they were following him? Did they get any closer? Not much to go on here. 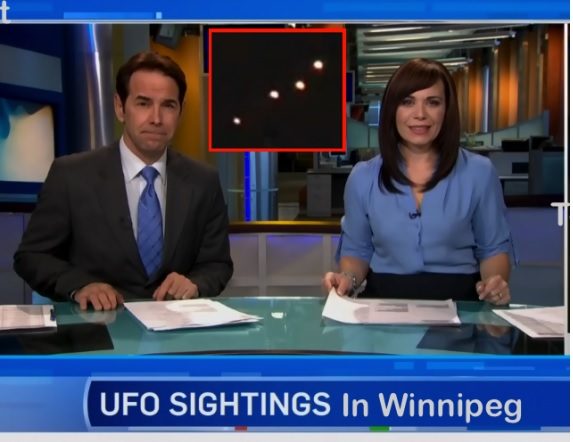 Brandon is 22 miles from the CFB (Canadian Forces Base) Shilo and this, like many other similar sightings in and around Brandon, was quickly attributed to military flares from Shilo operations. According to one report, there were over 30 UFO sightings by witnesses in Brandon last year. That’s a lot of flares. Has Canada been preparing for some sort of invasion or trouble from its neighbor to the south? No comments from the Canadian military or any government agencies appear to have been reported.

MUFON reports a few sightings in Brandon in the past year – usually similar bright lights – and nowhere near the number reported in Winnepeg, just a two hour drive away and a top UFO spot in Canada.

So, is Brandon becoming a UFO hot spot? Here’s another video from 2014.

It looks similar to the most current sighting and was also attributed to military flares. A quick search doesn’t pull up enough information to support anywhere near the 30 Brandon UFO sightings alleged in the reports. I know, I know … some sites say a government conspiracy is erasing them as fast as they can be reported. We have to do better than that.

Why did CTV Winnipeg think this one was worth reporting on? Slow news day? Access to a video with audio of someone who sounded scared? Trying to prove that most Brandon UFO sightings are flares from Shilo and the good stuff is still in Winnipeg?

Whatever the case, the advice from the expert on the video is good … keep watching the skies and get a recording or photos.