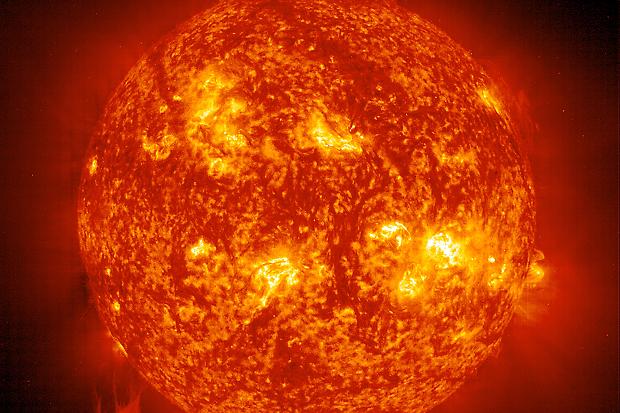 Climate Science Debates Find Their Place in the Sun

Man’s nearest star is less active after scientists noticed a plunge in the number of sunspots. As a result, some say, global temperature levels will not rise as much as predicted, while others insist this will do little to slow climate change.

ABU DHABI // August may be its usual sweltering self in the UAE, but it’s not business as usual with the source of that heat.

Something strange is happening to the Sun, and scientists are getting hot under the collar about it.

According to some, the Sun’s activity is dropping to levels last seen during a mini ice age that gripped the northern hemisphere 350 years ago. Others accept that the effect is real, but say global warming will still rule our future.

But some academics seem to regard the whole issue as too dangerous for public consumption and have sought to suppress it. Welcome to the less-than-dispassionate quest for truth that is climate science.

There is no dispute that the Sun has become quiescent. The Sun’s activity has long been known to vary on a cycle of about 11 years.

These peaks and troughs are revealed by sunspots, blotches on the surface caused by its magnetic field interfering with the flow of heat from the interior.

The latest solar cycle began in 2008, with sunspot numbers reaching a peak in 2014. But it was a decidedly feeble peak – barely half the previous level, and the lowest recorded since 1906.

Ever since, the Sun has been sliding towards a minimum, which it should reach around 2020. On current form, the cycle may prove to be the weakest since records began in the 17th century.

The arguments among researchers centre on whether this is significant. Just because sunspot numbers have plunged doesn’t mean the Sun itself is going off the boil.

Records from past sunspot cycles show that the Sun’s output changes by barely 0.1 per cent between peaks and troughs.

That, in turn, suggests that even if their numbers hit a record low, the temperature of the Earth would change by much less than the 1°C to 3°C temperature rise being predicted for the 21st century by computer models of global warming. Thus, even if the Sun is becoming less active, the effect is likely to be a downward tweak to an otherwise relentless climb in temperature propelled by greenhouse gases like carbon dioxide.

But not everyone is convinced. They point to intriguing evidence of an unexpected link between sunspots and climate known as the Maunder Minimum. Records show this began in the mid-17th century with a collapse in sunspot numbers and a drop in temperatures over Europe.

The Maunder Minimum coincided with the coldest part of the so-called Little Ice Age, which gripped the region from 1300 to the mid-19th century.

But was it a coincidence? Yes, if you agree with scientists who say sunspots have minimal effect on global temperatures. Perhaps not if you side with those who challenge the arguments against such a link.

There’s no doubt that the climate can behave in counterintuitive ways. Take the simple fact that August is the hottest month in the UAE. That’s because the Earth is at its closest to the Sun, right? Wrong: we were at our farthest from the Sun last month.

The seasonal tilt of the Earth is more important, as it controls the angle at which the Sun’s rays strike the ground, diluting their intensity. Add in other effects, such as the sluggish rate at which the world’s oceans warm up, and predicting the hottest month in this region suddenly no longer seems so simple.

Predicting the climate is far harder, as it demands that computer models reflect the many subtle effects that control global temperatures.

Climate modellers have been caught out by such effects in the past, so might they have missed a connection between sunspots and climate?

It certainly can’t be ruled out. Over the last few years, several research groups have found that even small reductions in ultraviolet light from the Sun can affect the ozone layer, offsetting some of the warming predicted expect over the coming decades. It can also trigger changes in the currents of air that control regional weather.

Current computer models suggest that if the Sun really is heading for a new Maunder Minimum, there will be a cooling effect, but it won’t be big enough to halt global warming. As for a new mini ice age, that seems highly unlikely.

On the face of it, this is good news all round. While there’s no need to panic about a big freeze any time soon, the Sun may at least be giving us more time to deal with global warming.

Yet that’s not how some scientists see it. They seem to regard this new twist to the climate change debate as a threat, opening the door to “denialists” who dismiss global warming as scaremongering.

The experiences of one solar physicist suggest these academic guardians of the faith are keen to stop the idea of a less active Sun getting any traction.

Prof Valentina Zharkova of Northumbria University in the UK has for years been working on the central puzzle behind the controversy: why does the usual 11-year solar cycle occasionally collapse?

By analysing data from recent cycles, she and her colleagues found evidence that the Sun has two sources of magnetic fields – and that when these get out of sync, the result is a collapse in sunspot numbers.

They’ve also made a prediction: that the Sun really is heading towards a Maunder Minimum-style event that could last until the 2050s.

Publishing in a scientific journal, the researchers saw their work as simply part of the quest to understand the Sun.

But when the team publicised their work through the UK Royal Astronomical Society, some academics decided to step in. Prof Zharkova this month told the Global Warming Policy Forum that the society came under pressure to withdraw a press release describing the findings.

The society refused. But attempts at such censorship should worry anyone who thinks the real goal of science is to uncover the truth, rather than follow a party line.

Evidence is the most powerful guide we have in the science of climate change. But if that evidence is censored or twisted, the science becomes mere sound and fury, signifying nothing.