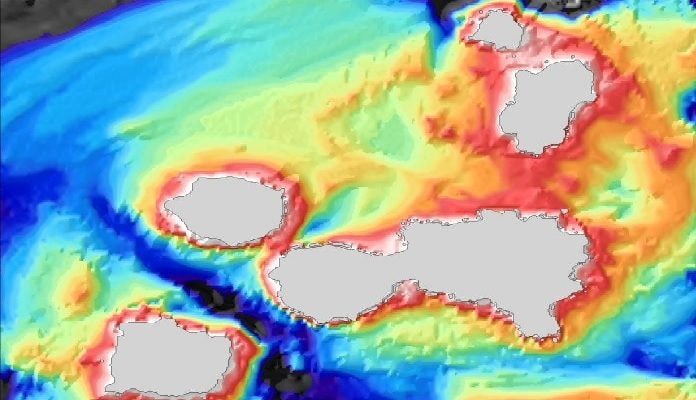 Cluster of Alaskan Islands Could be Super Volcano

If the researchers’ suspicions are correct, the newfound volcanic caldera would belong to the same category of volcanoes as the Yellowstone Caldera and other volcanoes that have had super-eruptions with severe global consequences.

The Islands of the Four Mountains in the central Aleutians is a tight group of six stratovolcanoes named Carlisle, Cleveland, Herbert, Kagamil, Tana and Uliaga. Stratovolcanoes are what most people envision when they think of a volcano: a steep conical mountain with a banner of clouds and ash waving at the summit. They can have powerful eruptions, like that of Mount St. Helens in 1980, but these are dwarfed by far less frequent caldera-forming eruptions.

Researchers from a variety of institutions and disciplines have been studying Mount Cleveland, the most active volcano of the group, trying to understand the nature of the Islands of the Four Mountains. They have gathered multiple pieces of evidence showing that the islands could belong to one interconnected caldera.

Unlike stratovolcanoes, which tend to tap small- to modestly-sized reservoirs of magma, a caldera is created by tapping a huge reservoir in the Earth’s crust. When the reservoir’s pressure exceeds the strength of the crust, gigantic amounts of lava and ash are released in a catastrophic episode of eruption.

Caldera-forming eruptions are the most explosive volcanic eruptions on Earth and they often have had global effects. The ash and gas they put into the atmosphere can affect Earth’s climate and trigger social upheaval. For example, the eruption of nearby Okmok volcano in the year BCE 43 has been recently implicated in the disruption of the Roman Republic. The proposed caldera underlying the Islands of the Four Mountains would be even larger than Okmok. If confirmed, it would become the first in the Aleutians that is hidden underwater, said Diana Roman of the Carnegie Institution for Science in Washington, D.C., co-author of the study.

“We’ve been scraping under the couch cushions for data,” said Roman, referring to the difficulty of studying such a remote place. “But everything we look at lines up with a caldera in this region.”

Despite all these signs, Roman along with John Power, a researcher with the U.S. Geological Survey at the Alaska Volcano Observatory and the study’s lead author, maintain that the existence of the caldera is not by any means proven. To do that the study team will need to return to the islands and gather more direct evidence to fully test their hypothesis.

“Our hope is to return to the Islands of Four Mountains and look more closely at the seafloor, study the volcanic rocks in greater detail, collect more seismic and gravity data, and sample many more of the geothermal areas,” Roman said.

The caldera hypothesis might also help explain the frequent explosive activity seen at Mount Cleveland, Roman said. Mount Cleveland is arguably the most active volcano in North America for at least the last 20 years. It has produced ash clouds as high as 15,000 and 30,000 feet above sea level. These eruptions pose hazards to aircraft traveling the busy air routes between North America and Asia.