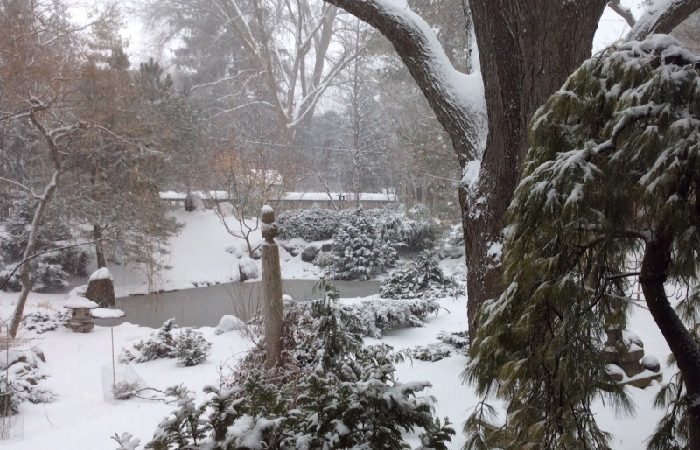 Cold & Snowy Around the Great Lakes, Coldest Start to April in 137 Years for Chicago

April is generally known to be a transition month for seasons in most of North America but you wouldn’t know it by the very cold temperatures and wintry weather. While this is going on in North America some other areas, the Arctic in particular, has been warmer than normal. I still strongly believe that our wobble and possibly our slowing rotation speed is affecting the jet stream which in turn is contributing to this unusual weather that is being seen around the world where some parts are facing warmer or hotter than usual conditions and other parts are facing just the opposite.

The Upper Midwest and Great Lakes have never seen an April like this. Extreme winter conditions have refused to relent even into the month’s second half, testing the patience of local residents.

Scores of records for both snow and cold have fallen. Minneapolis; Madison, Wis.; and Marquette, Mich., are among the many towns and cities experiencing their coldest-ever April. And Minneapolis; Sioux Falls, S.D.; and Green Bay, Wis., were recently dealt record snowfalls for the month.

And, with the wintry pattern lingering for a few more days, more records for extreme winter weather are likely to fall.

The cold and snow have been so persistent and disruptive that they are challenging the tenacity of Midwesterners, no strangers to long winters.

“Here in Ann Arbor, the attitude is a collective fuming,” tweeted Micheline Maynard. “I was about to switch out my snow tires, and it still isn’t time to do so.”

“I live in Minneapolis, and I am so over this Winter,” tweeted Paul Weimer. “I mean, living in Minnesota, ice and cold and snow are the thing … but there are limits!”

Another resident admitted to reaching a breaking point. “I’m convinced winter is never going to end,” Twitter user Molly said. “We’ve been dealing with it by complaining and eating (and drinking) a lot, ha.”

A viral video from Grand Rapids, Mich., shows a meteorologist unleashing an epic rant after his frustrated colleagues keep complaining about the forecast:

Are you tired of the cold weather? Garry Frank is tired about you (and his co-anchors) complaining about the weather.

The harsh conditions have contributed to the postponement of a record number of Major League Baseball games during April and many other outdoor events.

The brunt of the cold has hit the Dakotas, Minnesota, Iowa and Wisconsin, which have coped with conditions colder than Alaska.

How cold has it been this month? Through the first half of April a large swath of the Lower 48 was warmer than Anchorage, Alaska. A sizable area was even colder than Fairbanks, Alaska! @AlaskaWx pic.twitter.com/g4biThou0D

But much of the eastern two-thirds of the Lower 48 has been colder and snowier than normal.

Here are some of the specific records and near-records recently set for both cold and snow:

– Minneapolis has posted 11 days with temperatures below 30 degrees this month, the most on record in April by four days. Its average temperature so far this month (April 1-17), of 28.2 degrees, is the coldest on record by almost four degrees.

– The average temperature in Madison so far this month of 31.1 degrees, is the coldest on record, and about 13 degrees below normal.

– The average temperature in Marquette so far this month of 21.8 degrees, is the coldest on record by more than four degrees.

– Chicago has seen lows fall below to 30 degrees or lower 13 times this month, the most on record. It has posted nine days with highs below 40 degrees, tied for the third most on record in April.

– Many cities in the interior Northeast have yet to see temperatures in March or April match levels reached in February.

– Green Bay, with 24.2 inches, posted its largest April snowfall on record April 13-16, crushing the previous record of 11.0 inches from April 4 and 5, 1977. It was the city’s second biggest snowstorm ever recorded in any month.

– Erie, Pa. is within 1.5 inches of becoming the first big city (with a population of at least 100,000) to receive 200 inches of snow in a season. Accumulating snow is in the forecast on Thursday.

The cold, snowy pattern is the result of a huge dip in the jet stream over the eastern two-thirds of the nation. The jet stream’s dip became established in early March and has only slowly retreated northward.

A deep pool of cold air has lingered over eastern Canada, aided by extensive, yet-to-melt snow cover, which weather systems plunging into the Lower 48 have tapped.

While northeastern North America has been colder than normal in April, most of the rest of the Northern Hemisphere, the Arctic in particular, has been warmer than normal.

Coldest start to April in 137 years for Chicago

No one alive today has experienced the start of an April in Chicago as cold as this one.

It has been 137 years since the first 17 days of April have been as cold and snowy as they’ve been in 2018, according to National Weather Service meteorologist Gino Nizzo.

This April is the second-coldest on record, trailing only April 1881, Nizzo said.

Snow is forecast to continue Wednesday night into early Thursday, making for slippery driving as a slushy mix accumulates. About an inch can be expected on grassy areas and elevated surfaces, according to the weather service.

While the cold and snow are unusual, weather like this in Chicago isn’t unprecedented. Average snowfall in April is about one inch, and Chicago has seen measurable snowfall into early May, Nizzo said.

Still, he said, “What has been uncommon is the persistence of the snow and cold. The extent and severity has been at an extreme for the last couple of weeks.”

He said Chicago is on the verge of setting a record for the city’s coldest-ever start to April.

Wednesday started off with sleet and hail, with rain possible into the evening.