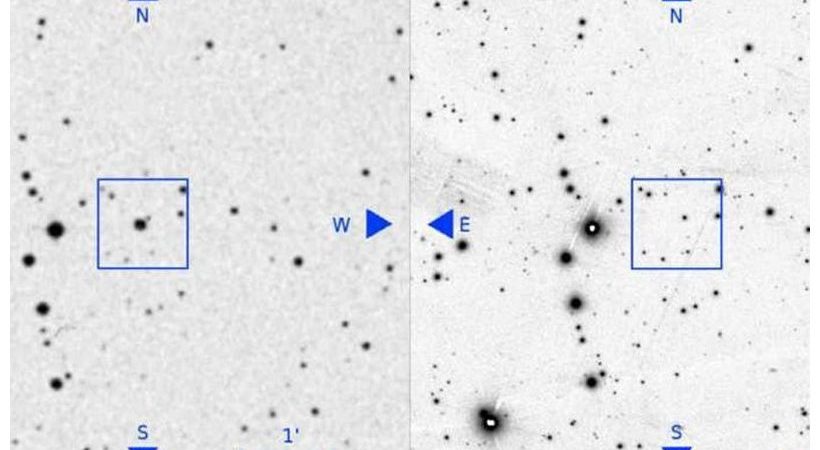 Headline image caption: ‘Where’d it go? An image taken in the 1950s (left) shows a large object at center that doesn’t appear in an image of the same field taken more recently. (Villarroel et al.)’

Physics in Sweden and the Institute for Astrophysics on the Canary Islands reports something strange in the current issue of The Astronomical Journal. They compared star maps from the 1950s with recent surveys, and discovered that 100 previously catalogued stars cannot be found anymore.

The group’s project, called Vanishing and Appearing Sources during a Century of Observations (VASCO) has been comparing mapped stars listed in the U.S. Naval Observatory Catalogue (USNO) B 1.0, dating from the 1950s, with those in another, more recent sky catalog, the Pan-STARRS Data Release (DR1). A total of 150,000 objects were found in the older catalogue (which lists 600 million stars) that did not have a readily identifiable counterpart in the new star survey, even though the Pan-STARRS Data Release includes stars that are five times less bright than the faintest light sources included in USNO. Of these 150,000 anomalies, the authors visually inspected 24,000 candidates and discovered that 100 of these point sources of light appear only in the older star survey. And since then, apparently, they’ve vanished.

Certainly, the most parsimonious explanation for the missing stars is that they are natural phenomena such as extremely flaring dwarf planets, failed supernova, or stars that might directly collapse into a black hole. But there seem to me too many anomalies to explain all the vanished stars as known natural phenomena. In their current paper, the authors themselves discuss the possibility that they’re seeing unknown phenomena, or that the vanished “stars” could be relics of technologically advanced civilizations, particularly the theoretical mega-engineering projects known as Dyson spheres.

Perhaps the missing objects are signs of an advanced civilization. But they’re probably not Dyson spheres. First, it would be hard to explain why and how such a giant construction project, completely shading out the light of the host star, could be done within the short period of less than a century. But more importantly, Brooks Harrop and I showed nearly 10 years ago that “traditional” Dyson spheres are not gravitationally stable. Even if one could be built near a star like our Sun, it would require more total mass than is available in all our Solar System’s planets, moons, and asteroids.

So what are the missing stars? A few might be explained as flaring stars whose brightness dropped below the detection limit, or stars that collapsed directly into a black hole. A large portion, however, might represent new stages in the life cycle of certain stars or new stellar phenomena that have not yet been seen. That by itself would be an exciting topic to investigate.

Another intriguing question: Where are the missing stars? Are they at the same location, just not emitting light anymore? Or perhaps they’ve moved to some other location. If the latter, could some of these represent huge starships, the size of moons or planets, that moved outside the field of view? This, of course, is a highly speculative suggestion. But it would address the hotly discussed Fermi Paradox, and would, in principle, be testable. If these “missing” light sources represent giant starships, some should appear in new star surveys in some other part of the sky. In an ideal case, we might even be able to track their trajectories through time. It would be challenging, no doubt, to pick out such motions against other background movements in space, like those of stars spinning around the center of their galaxy. Nevertheless, my suggestion to the authors is to focus their future work on light sources that suddenly appear in new star surveys, and see whether they can be correlated to the stars that vanished.

In her paper, Villarroel suggests another very promising direction for future research — to search for clusters of missing stars, which, if they exist, could be related to new natural phenomena in a particular region of space, or perhaps to activities of an extraterrestrial civilization. Either way, the authors have turned up something that may become very important for both astrophysical and SETI investigations.