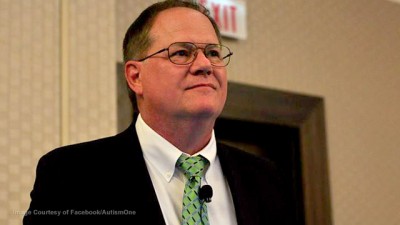 Nearly one year has passed since Dr. Jeffrey Bradstreet, a renowned physician known for his skepticism of immunizations (particularly the MMR vaccine) and his progressive autism research was found dead, floating in a North Carolina river with a single gunshot wound.

Leading up to his death, Bradstreet was working with a highly controversial molecule that occurs naturally within the human body and is believed to be capable of treating and reversing autism.

Researchers claim that GcMAF (Globulin component Macrophage Activating Factor), which becomes the GC protein after combining with vitamin D in the body, is effective for treating HIV, diabetes and diseases of the liver and kidneys. More importantly, GcMAF experts predict that the natural molecule has the potential to be a universal cure for cancer.

Due to the controversial nature of Bradstreet’s research, as well as the fact that his office was raided by officials with the U.S. Food and Drug Administration in the days leading up his death, the physician’s family hired a private investigator in hopes of finding the truth about Bradstreet’s untimely demise.

Finally, new details regarding Bradstreet’s death have been revealed through a recent interview conducted by the producer of the documentary VAXXED. Polly Tommey sat down with Bradstreet’s baby brother Thom and his lovely wife Candice at the AutismOne conference held towards the end of last month at the Loews Chicago O’Hare Hotel in Rosemont, Illinois.

Thom said that while the family knew in their hearts that Bradstreet was murdered, it wasn’t until they had the opportunity to review the case forensically that they realized the evidence supports their theory that his death was in no possible way a suicide, as has been reported by police and the mainstream media.

“People who knew him knew he would never take his own life,” said Thom, adding that information uncovered by a forensic scientist hired by the family validates that conjecture. After meeting with the medical examiner and reviewing case files and photographs, the private forensic scientist ruled that Bradstreet’s death was absolutely not a suicide.

“It is our 100 percent belief that Jeff did not commit suicide. Not only because of who Jeff was as a person, but because we looked at the science of it; we looked at the medical proof and it’s just not possible that Jeff took his own life,” commented Thom.

“Unfortunately, there’s an ongoing investigation so there’s not a lot we can share about the specifics. But the way the bullet entered into the body, it’s almost impossible for an individual to do that and it was far enough away that it left no tattooing, no significant burn marks or anything like that.”

‘Where would the world of autism be without Jeff Bradstreet?’

Bradstreet’s younger brother noted that while it would be easy to say the murder was a conspiracy due to his controversial (and highly effective) work, they can’t yet say for sure, adding that they must know for sure before reaching any conclusions regarding the perpetrator(s)’ identity.

The family said that while they are still overcome with immense sadness, they know that Bradstreet is in heaven because he was a “great man of faith” who loved God.

“The sadness is to know that there’s all these parents out here, existing patients of Jeff or recently diagnosed, where do they go? Where would the world of autism be without Jeff Bradstreet? [Without] his 20 years of knowledge and input and experience, where would we be?” asked Thom.

The Bradstreets asked the public for patience while they attempt to uncover who may have been behind their loved one’s death.

“Have patience. Be in prayer. Stay actively involved in the world of autism,” said Thom, adding that supporting projects like VAXXED is a great way to continue Bradstreet’s legacy.