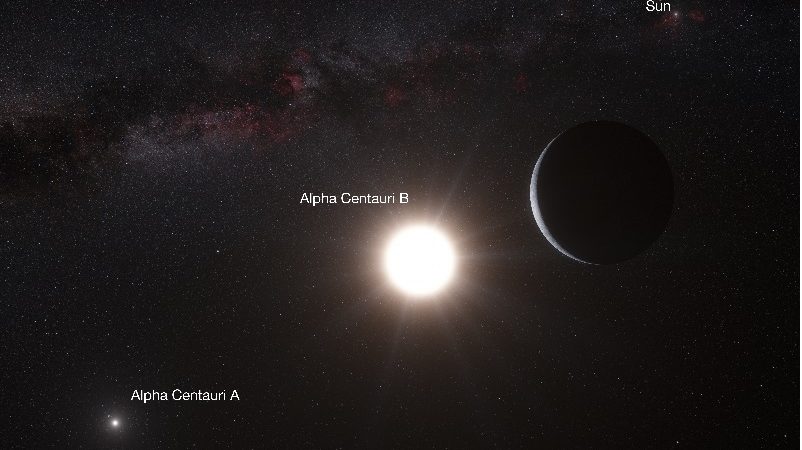 Efforts to send some type of man-made probe to the Alpha Centauri system may have gotten a huge boost Tuesday as the European Southern Observatory (ESO) confirmed the existence of a planet around Proxima Centauri that could potentially harbor (or support) life. The announcement confirms rumors of such a planet, hints of which were first found in 2013.

Proxima Centauri is only 4.24 light years from earth, and the discovery of a planet — dubbed Proxima b — makes it the closest exoplanet (a planet outside our own solar system) ever discovered. The planet is about a third bigger than our own, but it has a much faster orbit at about 11 days due to being only 7 million miles from its host star.

That’s only a fifth of the distance between the Sun and Mercury. However, instead of ending up a barren wasteland like Mercury is, Proxima b is able to support life due to differences in Proxima Centauri’s brightness. The star is a red dwarf, making it much smaller than our Sun, and it operates at a temperature of 3,050K, about 2,700K cooler than our own Sun.

“Many exoplanets have been found and many more will be found, but searching for the closest potential Earth-analogue and succeeding has been the experience of a lifetime for all of us,” lead astronomer Guillem Anglada-Escudé said. “Many people’s stories and efforts have converged on this discovery. The result is also a tribute to all of them. The search for life on Proxima b comes next.”

We have no visual evidence of Proxima b to go on, but astronomers say they feel fairly confident of a few characteristics of the planet. It appears to be terrestrial in nature rather than a gas giant, although they are unsure if it has an atmosphere. It is within what scientists refer to as the “habitable zone” of Proxima Centauri, so there is at least a higher chance that it does.

There are definitely some significant hurdles for life to exist, say scientists. While the planet is in Proxima Centauri’s habitable zone, which suggests liquid water could exist on the surface, its extremely close proximity to the star means the surface is exposed to far higher levels of X-ray and ultraviolet radiation from its host star than Earth is.

Astrophysicists also argue about whether it is possible for life to exist on planets so close to their suns, though it’s all conjecture as we obviously haven’t discovered life outside of our own home planet just yet.

They’ve also argued that the planet just might be what’s called “tidally locked,” which means its body rotates on its own axis as quickly as it rotates around its host body. This means one side will always face the star, eliminating the day-night cycle. Some researchers believe that this might prevent the existence of an atmosphere, but again we’re only speculating.

One thing is certain though: the confirmation of the existence of Proxima b is likely the most exciting discovery yet among the 3,000-plus exoplanets discovered over nearly a quarter century of searching.