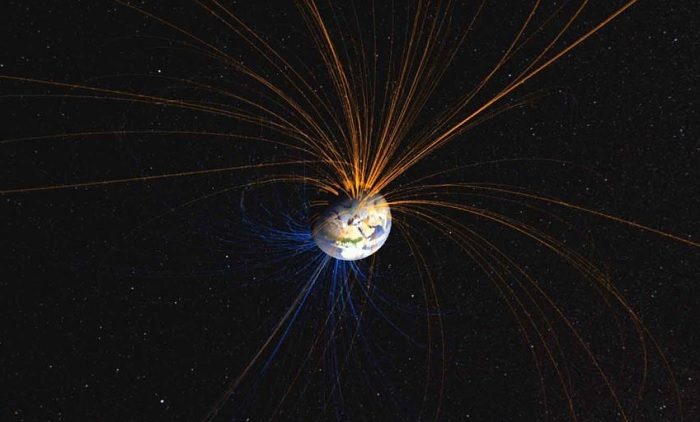 “Earth’s magnetic field appears to be going through some bizarre changes, with its magnetic north pole shifting from the Canadian Arctic towards Siberia, and the flipping seems to be accelerating, raising concerns of a possible geomagnetic reversal..”

Our planet’s magnetic field is something that naturally helps many animals to navigate, while also serving as a base for a huge amount of technological advances by humanity, such as television broadcasting, weather forecasting, and communications.

Earth’s magnetic field appears to be going through some bizarre changes, with its magnetic north pole shifting from the Canadian Arctic towards Siberia, and the flipping seems to be accelerating, raising concerns of a possible geomagnetic reversal, according to the journal Astronomy.

The speed of the north pole shift has reportedly risen up to 30 miles per year (48 kilometres per year). This wouldn’t be the first geomagnetic reversal, as Earth has switched its magnetic poles at least ten times over the last 2.6 million years, with the most recent taking place some 780,000 years ago. Consequently, many scientists believe the planet is long overdue for another switch.

Still, it is not yet fully possible to predict these changes. The anomalies that may be caused by these changes are estimated by scientists in varying ways, with a plausible magnetic reversal affecting both nature and human technology. One of the major threats suggested by the scientists is that, during a magnetic reversal, Earth’s protection from charged particles from the Sun and cosmic rays will weaken.

According to some geologists, such periods have correlated with mass extinctions in the past, while others argue that humans or their ancestors have been on Earth for several million years, having survived many reversals.

There is also a suggestion that such anomalies might be caused by the remains of the ancient planet Theia – a cosmic body that struck Earth some 4.5 billion years ago, with the collapse resulting in the formation of our satellite, the Moon. While the remains of Theia have never been found, some scientists believe they are actually buried deep inside Earth.

According to recent geological studies, the remains may be two rocks larger than the size of Mount Everest that are denser and hotter than the rest of the Earth’s mantle. These rock masses apparently interfere with the convection of molten iron in the planet’s core, where the magnetic field is generated, therefore weakening it in the South Atlantic.While the possible aftermath of a hypothetic magnetic reverse is yet to be fully estimated, scientists believe the impact depends on the time it takes. In the event of the magnetic field slowly shifting for many thousands of years, both humanity and nature will be able to adapt to it.