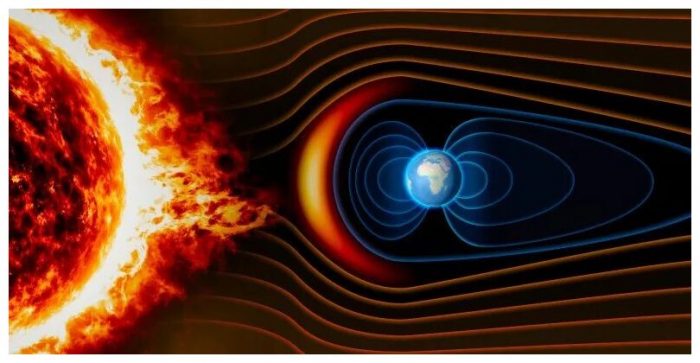 “Solar winds are constantly flowing past the Earth, however, they are a lot stronger in the aftermath of a CME”

by Jess Thomson
via Newsweek
Image: © ISTOCK / GETTY IMAGES PLUS

So-called cracks in the Earth’s magnetic field have led to spectacular aurora light shows being seen in the skies, despite there not having been a solar storm to generate them.

According to spaceweather.com, this is called the Russell-McPherron effect, with cracks in the magnetic field letting more solar wind pass through during the equinoxes, i.e. during the spring and fall equinoxes, where both the day and night are the same length.

“The Rusell-McPherron effect is more of a geometrical effect to do with the orientation of the solar wind’s magnetic field and that of the Earth. There is always a cusp or open region of the Earth’s magnetic field around the north and south poles so the ‘cracks’ are permanent,” Ciaran Beggan, a geophysicist from the British Geological Survey, told Newsweek.

This solar wind is made of plasma that has been ejected from the sun during a coronal mass ejection (CME), which is usually ejected by sunspots, which have particularly strong coronal magnetic fields. Solar winds are constantly flowing past the Earth, however, they are a lot stronger in the aftermath of a CME

As the solar wind is always present, it is constantly loading additional energy into the magnetosphere. According to Beggan, the magnetosphere is compressed on the dayside to around 3,700 miles and extends out to over 370,000 miles on the nightside. Energy from the solar wind is transferred and builds up over a few hours and then is dissipated by the magnetosphere by shedding it through electric currents. These electric currents flow into the ionosphere, exciting gas atoms in the atmosphere, and creating the aurora.

“There really aren’t any cracks as such,” Mike Hapgood, the principal consultant on space weather at Rutherford Appleton Laboratory (RAL) Space, told Newsweek. “I’m not quite sure where the term has come from, but it has appeared in media articles in recent years. It’s a melodramatic description of how the Earth’s magnetic field can merge with the magnetic field in the solar wind, allowing solar wind energy to enter the region of space controlled by Earth’s magnetic field (what we call the magnetosphere).”

According to spaceweather.com, this effect means that September/October and March/April are the best times of year to catch auroras. The 2022 fall equinox is on September 22.