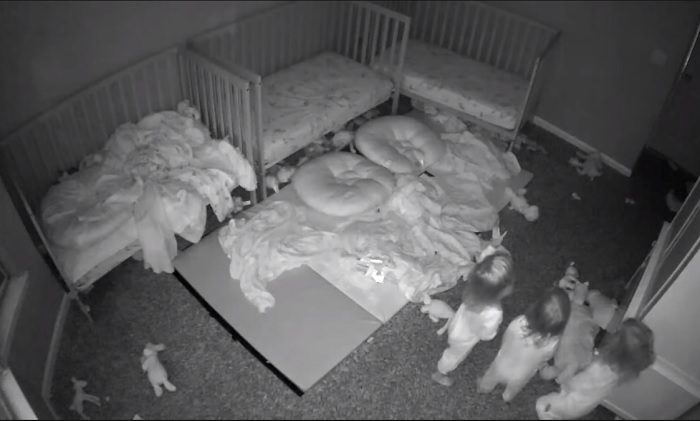 The creepy conversation between two-year-old triplets and a ‘ghost’ in their room was captured on a baby monitor as their mother reveals the young girls claim to have seen a ‘monster’.

Caitlin Nichols, 25, said she overheard her triplets Presley, Millie, and Hays screaming and arguing with each other in their Georgia home on January 26.

When she checked the baby monitor, the girls appeared to be speaking to an unseen figure by the wall.

Nichols said her daughters have not interacted with whatever they see on the wall in the same way since, but that they have woken up in the middle of the night claiming to see a monster in the exact same spot.

In the spooky footage, the three girls are out of bed and looking at the same wall.

One of the girls points at something she sees there and the other two run over.

The first little girl runs over to the opposite wall and back twice, appearing to shake her fist at some thing she sees and shouts ‘in your face’.

She is then joined by her sister and the pair run back and forth trying to jump up and hit something.

Their sister climbs on one of the beds to try and do the same.

At a later point, the three girls hide behind their closet before one of them comes out again to point at the wall.

The girls reemerge from behind the closet only to run back screaming again.

‘You like our beds?’ one of the girls shouts, and the other screams: ‘You have a problem’.

The triplets, pictured, have since been waking up and say they see a ‘monster’ on the wall

‘We’ve had a couple of other spooky encounters before, like the girls’ toys going off while they are asleep, so this isn’t the first,’ she admitted.

In an Instagram post of the clip, Nichols said that the girls had just woken up from a nap and were playing when she heard them starting to shout.

She said she heard them shout ‘I’m mad at you’ over and over as they looked at the wall.