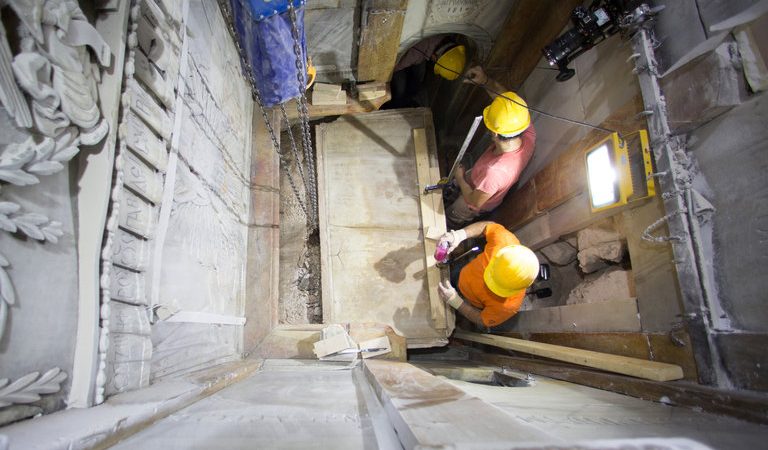 JERUSALEM — The only mystical power visible was the burning light from seven tapered candles. And yet for ages, the tomb that sits at the center of history has captured the imaginations of millions around the world.

For centuries, no one looked inside — until last week, when a crew of specialists opened the simple tomb in Jerusalem’s Old City and found the limestone burial bed where tradition says the body of Jesus Christ lay after his crucifixion and before his resurrection.

“We saw where Jesus Christ was laid down,” Father Isidoros Fakitsas, the superior of the Greek Orthodox Patriarchate, told me. “Before, nobody has.” Or at least nobody alive today. “We have the history, the tradition. Now we saw with our own eyes the actual burial place of Jesus Christ.”

For 60 hours, they collected samples, took photographs and reinforced the tomb before resealing it, perhaps for centuries to come. By the time I visited one dark night this week, the tomb had already been closed again. In the end, just about 50 or so priests, monks, scientists and workers had peered inside, and they seem likely to be the only ones on the planet who will do so in our lifetimes.

The tomb believed to be Christ’s was opened as part of a complex renovation of the shrine that was built around it long after his death in what is today known as the Church of the Holy Sepulcher, perhaps Christianity’s holiest site. Scholars hope to study what they found to determine more about the event that spawned one of the world’s great religions.

Pilgrims have been flocking to the church for generations, sometimes as many as 5,000 a day. To get to the tomb, many walk along the Via Dolorosa, the winding path through Jerusalem’s Old City where Jesus is said to have been forced to bear his cross. Vendors like those lining the way today would not have been there then, but otherwise not much has changed.

The church was first built where the tomb was discovered in the fourth century during the reign of Constantine, the first Roman emperor to officially convert to Christianity. It was sacked after Jerusalem fell to the Persians in the seventh century, then rebuilt and later destroyed by Muslim caliphs in the 11th century. After the Crusaders captured Jerusalem, the church was restored in the 12th century but burned to the ground in the 19th century and then rebuilt yet again.

A site known as the Garden Tomb is said by some to be the site of the crucifixion, while the Church of the Holy Sepulcher is more commonly deemed by Christians to be the place where Jesus was buried and rose again. At the time, it was outside the Old City, but the wall was later moved to include the church and its famous tomb.

The marble shrine, known as the Aedicule, was built in its existing form in 1810 during the Ottoman era and has been crumbling lately. But only after pressure from the Israelis did the three religious communities that jealously share the church, Greek Orthodox, Armenian Orthodox and Roman Catholic, agree to a renovation that began last spring.

Under the direction of Antonia Moropoulou from National Technical University, the conservation experts removed the iron cage built by the British in 1947 to shore up the earthquake-damaged Aedicule and then began taking apart the shrine piece by piece. They removed disintegrating mortar, reconstructed parts of the sometimes-swollen masonry, reset the columns and injected grout into cracks in the structure.

Rainwater had deteriorated much of the mortar over the centuries. Iron support bars that were fully corroded will be removed and replaced by titanium.

The specialists had no plans at first to open the tomb, but they decided a couple of weeks ago that they needed to do so in order to ensure that nothing could leak inside.

It was a delicate operation. The top of the tomb was split, and the specialists worried that lifting it would break it.

“The main goal was not to break the plate,” said Harris Mouzakis, an assistant professor of civil engineering at National Technical University who is working on the project.

The team felt the pressure. “We had to be very careful,” Mr. Mouzakis said. “It was not just a tomb we had to open. It was the tomb of Jesus Christ that is a symbol for all of Christianity — and not only for them but for other religions.”

Once they removed the marble cladding, they discovered another marble slab with a cross carved into it. Beneath that, they found the limestone slab hewed from the wall of a cave that is believed to be where Jesus lay after his death.

That slab had not been seen since at least the 1500s. The team worked around the clock for three days, gathering dirt and other material from inside the tomb for future study. They closed it again quickly to avoid disrupting the visits of pilgrims who still flock to the church each day.

“Every Christian, they want to come and visit the holy place and open his heart to them,” said Father Isidoros, 43, who first came to the church a quarter-century ago, and lives there.

Ducking his head, Father Isidoros brought me into the tiny room where the tomb rests. A small window had just been installed opposite the tomb to show the original cave walls where Jesus is believed to have been buried. The tomb itself looked plain and unadorned, its top separated down the middle. The candles flickered, illuminating the small enclosure.

The hardest part of the renovation is now behind the team, but months of work to bolster the shrine lay ahead.

“It will last many, many years,” Mr. Mouzakis said. “We will succeed if after 200 or 500 years somebody will come back to restore our work.” – NYTimes