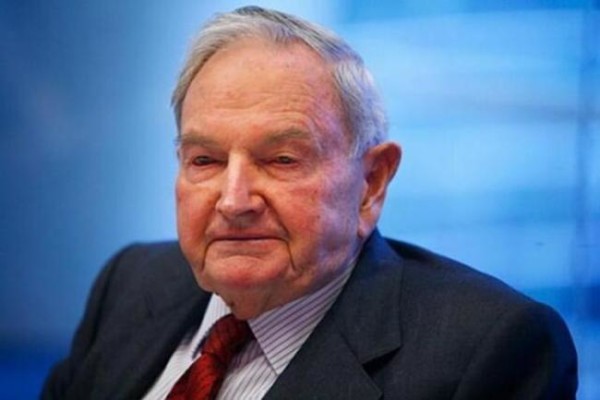 David Rockefeller Says Conspiracy About ‘One World Order’ is True

The world’s oldest billionaire David Rockefeller revealed that the idea of a one world order is not just a conspiracy.

David, patriarch of that family and of a vanished Wasp establishment, celebrated his 100th birthday.

He is part of a family dynasty whose name is associated with America and has become legend. His grandfather John D Rockefeller who died in 1937 was the founder of Standard Oil and the world’s richest individual. The name Rockefeller has been associated with wealth, power, politics, finance, diplomacy, philanthropy, marijuana prohibition, aliens, UFO’s and conspiracy theories.

One such conspiracy theory is the creation of a ‘one world order’, according to which a group of ‘Elites’, including David, are milking the system for their own benefits and the benefit of their friends and fellow conspirators against the interest of the United States.

They have been accused of setting up institutions such as the ‘Trilateral Commission’ and the ‘Bilderberg Group’ among others to advance their interests nationally and globally.

Their aim is to create an international world order under a single umbrella, to deal with global issues, initiated and controlled by western countries. Obviously such a hefty vision could be seen as a conspiracy, by the powerful and the well connected, to dominate and manipulate the weak and the fragmented people of the world.

David Rockfeller flourished at the intersection of business, high finance and international diplomacy. He was never elected to any political office, but in his heyday, in the 1970s and 1980s, he seemed to know every politician who mattered on the planet.

Today, there’s much hyperventilating about the secretiveness of the Bilderberg Group (another collection of worthies favoured by David). But that fuss is nothing compared with the suspicions once aroused by the Trilateral Commission. For the right, it was a cabal operating as a global government; the left saw an unaccountable rich man’s club, promoting free markets to the exclusion of all else. Senior’s favourite grandson was accused of being the plotter in chief – and he positively revelled in the charges.

“Some even believe [the Rockefellers] are part of a secret cabal working against the best interests of the United States, characterising my family and me as ‘internationalists’ conspiring with others around the world to build a more integrated global political and economic structure – one world, if you will. If that’s the charge, I stand guilty, and I’m proud of it.”

Most fascinating perhaps is David’s relationship with the domineering Nelson. His elder sibling was tempestuous, ferociously ambitious and a compulsive womaniser. As a child, David was reserved and solitary, with an passion for collecting beetles. As an adult, he was suave and non-confrontational, a man who loathed scenes above all else. Not surprisingly, the pair grew apart, especially after Nelson’s divorce and remarriage to his mistress Happy Murphy in 1963, a scandal that may have scuppered his presidential aspirations.

Gradually, starting even before Nelson’s death, David became the family head, his image further burnished by philanthropy: over his life, he is reckoned to have given away $900m, including $79m last year alone. In 2002, he became the first Rockfeller to write an autobiography, entitled, simply, Memoirs.

Ultimately, David Rockefeller is a reminder of how even the mightiest dynasties fade. Before the Kennedys, the Rockefellers were America’s unofficial royal family. But the last Rockefeller to hold public office, David’s nephew Jay, retired last year from his Senate seat in West Virginia. The Kennedys are increasingly history, and, one day, the Bushes and Clintons will be as well. The younger Rockefellers have gone their own way. Most have to make their own living; some have even changed their names. Being a Rockefeller ain’t what it used to be.