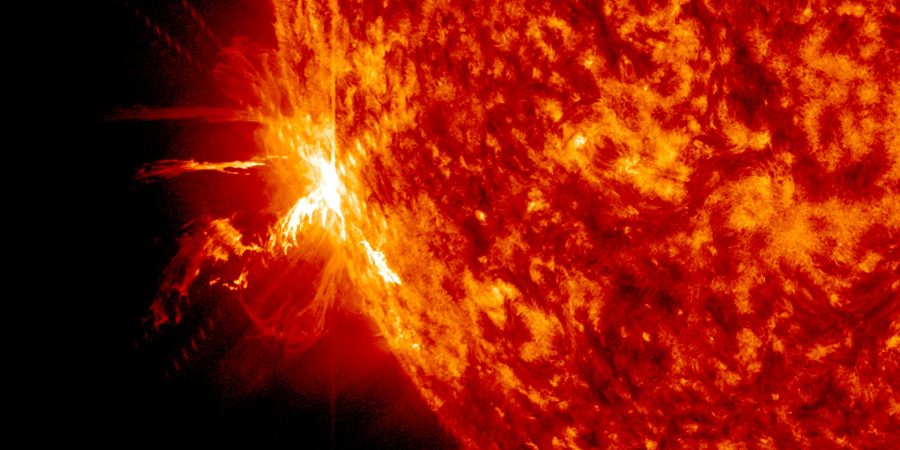 An extraordinary account of the impact space weather had on military operations in Vietnam in 1972 was found buried in the US Navy archives, according to a newly published article in Space Weather.

On August 4, 1972, the crew of a US Task Force 77 aircraft flying near a naval minefield in the waters off Hon La observed 20 to 25 explosions over about 30 seconds. They also witnessed an additional 25 to 30 mud spots in the waters nearby.

There was no obvious reason why the mines should have detonated. But it has now emerged the US Navy soon turned its attention to extreme solar activity at the time as a probable cause.

The more we can understand the impact of such space weather on technology then, the better we can be prepared for any future extreme solar activity.

As detailed in a now declassified US Navy report, the event sparked an immediate investigation about the potential cause(s) of the random detonations of so many sea mines.

The sea mines deployed had a self-destruct feature. But the minimum self-destruct time on these mines was not for another 30 days, so something else was to blame.

On August 15, 1972, the Commander in Chief of the US Pacific Fleet, Admiral Bernard Clarey, asked about a hypothesis that solar activity could have caused the mine detonations.

Many of the mines deployed were magnetic influence sea mines that were designed to detonate when they detected changes in the magnetic field.

Solar activity was then well known to cause magnetic field changes, but it wasn’t clear whether or not the Sun could cause these unintentional detonations.

Early August in 1972 saw some of the most intense solar activity ever recorded.

Those conducting the investigation into the mine incident visited the Space Environment Laboratory at the National Oceanographic and Atmospheric Administration (NOAA) near Boulder, Colorado, to speak to space scientists.

One of the scientists at NOAA at the time was the now Emeritus Professor Brian Fraser, from Australia’s Newcastle University, and it’s an event he told me he remembers well:

I was on my first sabbatical leave at NOAA working with Wallace (Wally) Campbell’s group, and one day in Wally’s office I noticed a group of US Navy brass hat gentlemen and a couple of dark suits.

Brian said he had later quizzed Wally on what was going on, and Wally explained they were concerned about geomagnetic field changes triggering sea mines laid in Hai Phong, North Vietnam.

There was no mention whether or not they had exploded but maybe Wally was being coy. And of course it was all probably top secret then.

The outcome of this investigation, as stated in the declassified US Navy report, detailed “a high degree of probability” that the Destructor mines had been detonated by the August solar storm activity.

The storms of early August 1972 were no different. There were numerous reports across North America of power disruptions and telegraph line outages.

Now that light has been shone on the impact of these events on sea mine operations in 1972, the scientific community has another clear example of space weather impacts on technologies.

The intensity of the early August activity peaked when an X-class solar flare at 0621 UT August 4, 1972, launched an ultra-fast coronal mass ejection that reached Earth in the record time of 14.6 hours. The solar wind normally takes two to three days to reach Earth.

Scientists think that the previous slower ejections from earlier flares had cleared the path for this fast disturbance, similar to what was observed by the STEREO spacecraft in July 2012.

It’s the impact of this fast disturbance in the solar wind on the Earth’s magnetosphere that probably caused the detonation of the Destructor mines.

Using the past to predict the future

The Dst index, measured in nano-Tesla (nT), is a typical measure of the disturbance level in the Earth’s magnetic field – the more negative, the more intense the storm.