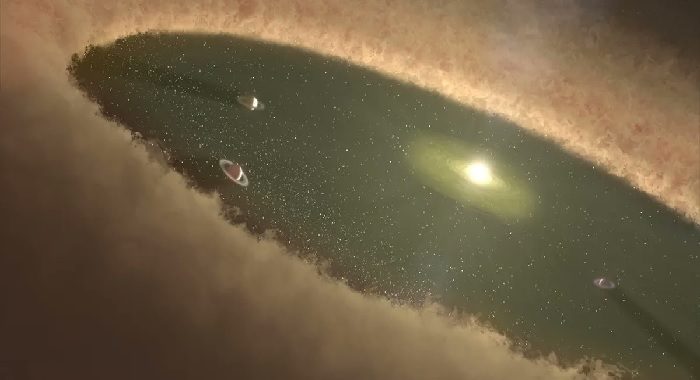 “In the early solar system, the gas giants sat in a dusty cloud around the nascent sun in nearly circular orbits.”

The solar system’s current planetary orbits seem stable, but that’s only because the planets have settled into them over billions of years. The early solar system was a much different place than that seen today, and for almost 20 years, scientists thought they had a good handle on how it got that way. But more recently, data had started pointing to some flaws in that understanding – especially about how the giant planets in the outer solar system got where they are today. Now an international team of astrophysicists thinks they have a better understanding of that process, and they believe it could help solve a long-standing argument about the early solar system.

Currently, the best model scientists have for the formation of the solar system is known as the Nice model, after the town in France, where it was first developed in 2005. As part of this model, the gas giants that currently reside in the outer fringes of this solar system originally orbited what became the sun much more closely with more circular orbits. However, something caused instability in the system that kicked those planets out into the much more unevenly spaced and oblong orbits we see them in today.

What exactly caused that anomaly has thus far been a mystery. However, a team comprised of researchers from Michigan State University, Zhejiang University, and the University of Bordeaux think they have an answer. It’s as simple as dust in the (solar) wind.

“Early Solar System instability triggered by dispersal of the gaseous disk”
by @beibeiliu, @sethajacobson and myself.

In the early solar system, the gas giants sat in a dusty cloud around the nascent sun in nearly circular orbits. When the sun ignited, it began to blow the dust in the circumstellar disc away. Some of that dust happened to blow past the orbit or the gas giants, causing the instability that the Nice model sees.

However, how the researchers fleshed out the idea also solves some problems the Nice model had. One major one was data, such as that collected from moon samples, pointed to a much quicker path to this instability that was typically found in the original Nice model. With this updated “inside-out” dust cloud evaporation model, that instability’s laborious path of hundreds of millions of years is condensed down to a timeline of a few million years, which matches much better with the existing data.

That’s not the only data it matches well with, however. The Nice model itself is partially controversial for pointing to a potential ninth planet in the early solar system – and it doesn’t mean Pluto. A favorite of many a conspiratorial skywatcher, Planet 9 (or Planet X) has been garnering more and more attention after a Caltech study in 2015 found there might be something huge lurking around 50 billion miles away from the Sun. 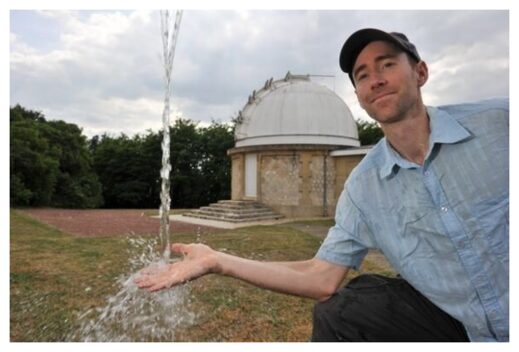 © Sean Raymond / MSU
Author Sean Raymond of the University of Bordeaux demonstrates how dispersion can have a massive effect on the surrounding material.

The original Nice model actually works better with five gas giant inner planets, but in those calculations, one of those planets is ejected out into interstellar space to become a rogue planet. In the updated model, the outcome of the planetary orbital alignment is essentially the same whether there are four or five starting gas giants in the system. However, they do match reality slightly better if there are only four planets initially introduced into the model.

As with much theory, this new model could potentially impact our understanding of the formation of the early solar system and could resolve a long-standing argument over what the original trigger of the instability that so shaped our planetary neighbors was. But ultimately, even this new model will have to hold up to the data, and that is plenty more to collect before the true story of our early solar system is clear.