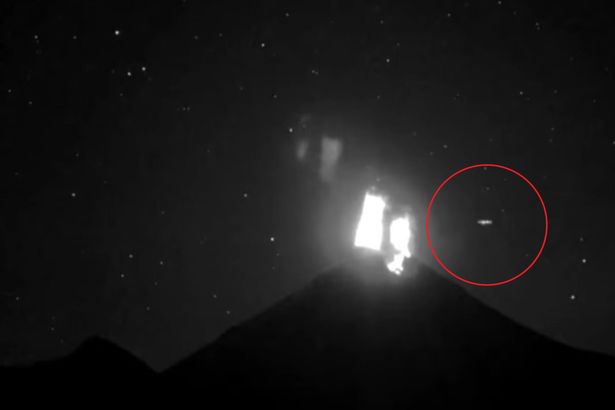 Did Aliens Cause This Volcano to Erupt? Bizarre Video Sparks UFO Rumours Among Sky-Watchers

The strange disc-shaped objects are seen whizzing past Colima Volcano in Mexico, just as it erupts

Were aliens behind the sudden explosive activity of this volcano?

Conspiracy theorists say this intriguing video footage shows a cigar-shaped UFO flying past the mouth of the Colima Volcano in Mexico just as it erupts.

The strange, thin disc is seen passing quickly through the sky just as smoke and lava begins to spew from the top of the mountain.

It appears to pass through or behind the smouldering magma before exiting through the other side and continuing to fly off.

Cigar shaped: The strange object spins past the erupting volcano

The mysterious footage has sent UFO hunters into a spin.

Ufologist Scott C. Waring believes it shows an alien spacecraft performing a pick-up or drop off at an extra-terrestrial hideaway deep within the volcanic chamber.

“The UFO passes over and through the lava shot up from the mouth of the volcano,” he wrote.

“As it gets above the mouth there is a bust of light and all goes black. The UFO then flies away.

“I believe that as the UFO went over the mouth, it transported someone or something to or from the underground base below the volcano.”

If conspiracy theorists are to be believed, cigar-shaped UFOs are on something of a tour of Earth at the moment.

Last month, YouTube user Shreds1620 filmed himself using a selfie stick as he travelled down a mountain in an unknown location – and captured a stick like object hovering above him.

EDITOR’S COMMENT: There seems to be a lot of sightings/videos of this occurrence where a UFO (Unidentified Flying Object) is seen around dangerously active volcanoes. One can’t help but wonder what is the real story behind this. I would love to hear what other people think about these recurring events.