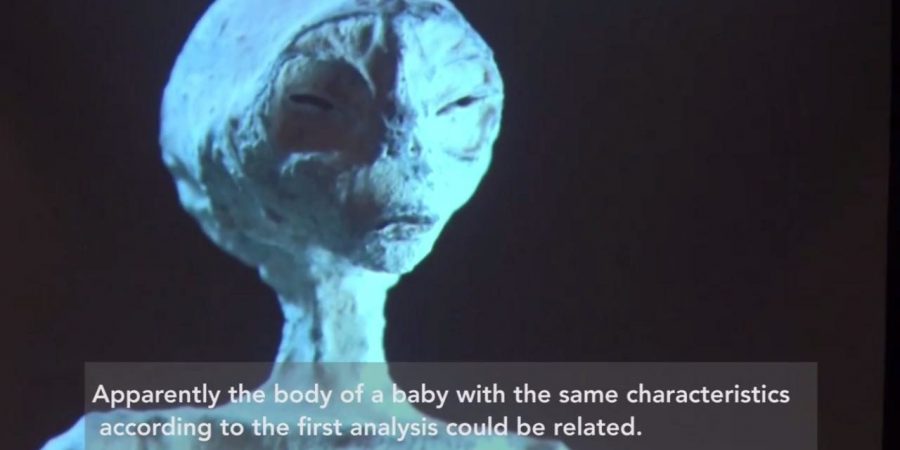 Claims the creatures were seen by the “discoverers” of the so-called mummified remains of “three-fingered bodies” is the latest twist in a sensational story that has been branded an elaborate hoax by many, but has taken the internet by storm.

UK-based UFO investigators Steve Mera and Barry Fitzgerald revealed the new claim in a video documentary charting their mission to investigate the “alien” bodies in Peru.

They spoke to members of the Inkari Institute, an archaeological research team in Cusco, Peru, which was allegedly handed the bodies by blackmarket tomb raiders said to have found the tomb in a secret location in Nazca, Peru.

Mr Mera told Express.co.uk: “We were told that the bodies were discovered in a tomb in Nazca.

“Inside were two sarcophagi, one of which contained around 20 small bodies, all of which around two feet in length, some missing their heads which were later found throughout the interconnecting tunnels.

“There was even claims of discoverers seeing live entities fleeing down tunnels on arrival.”

A larger three-fingered creature and a child were said to be found buried nearby.

The new video, released on YouTube in the UAMN TV channel, shows an interview between Mr Mera and people from the institute, including president Thierry Jamin.

She said: “And they also saw live biological beings… entities two metres in size, but they escaped.”

Last month, Express.co.uk revealed the first pictures of what is alleged to be a secret tomb where several mummified aliens were found in Peru.

Gaia.com, the paranormal website behind the outlandish claims, says that at least five mummified aliens have been found buried in Nazca, Peru.

The website has released a five videos about the “discoveries,” and insists a genuine investigation is underway, despite scientists rounding on the online paranormal site amid claims it is pushing a massive elaborate hoax.

The latest disclosure came after scientists and the Peruvian World Congress on Mummy Studies released statements saying they believed the creatures were hoaxes that had been made using real human remains, before demanding an official inquiry into whether any archaeological crimes had been committed.

Mexican journalist Jamie Maussan, who is leading the probe in the Gaia.com videos, has previously investigated a series of alleged alien body discoveries which turned out to be hoaxes.

However, the outlandish claims continue to be made by the Gaia.com team.

There was even claims of discoverers seeing live entities fleeing down tunnels on arrival.

In the latest Gaia.com video Melissa Tittle, director of original content at the website says: “We are going to give it [the baby] a cat scan, X-ray and samples taken.”

Dr Konstantin Korotkov, Deputy Director of Saint-Petersburg Federal Research Institute of Physical Culture, in Russia, said: “It’s important that I was able to take sample from the baby because and it was bone, little bone, because it is a solid bone, and it is much easier to make analysis from solid bone than from compared with just tissue.

“You get a very clear answer of what the dating of this sample is, what the DNA analysis is of this sample, because I have no doubt it is a being, just a little being.

“Is it male, is it female, what are the genes?”

Discussing an X-ray of the object, Dr Korotkov said: “From first glance it is of the same construction as our bones.”

Dr Korotkov is described as an expert in alternative medicine and also claims to have photographed a soul leaving a human body.

Many ufologists believe the Gaia.com films are promoting a massive hoax.

Nigel Watson, author of the UFO Investigations Manual said they were “plaster of Paris fakes”.

Express.co.uk has asked Gaia.com and Mr Maussan for details about where the so-called alien mummies were discovered.

We asked for the location, who found them, whether it was part on an official dig, and if there were any pictures of the discovery.

Both Gaia.com and Mr Maussan failed to answer.

However, footage in a subsequent video shows what appears to be the entrance to the tomb and mummified remains buried in there, at an undisclosed location.

Mr Maussan said at an earlier press conference about the discovery that the mummified burial of the bodies suggests they once coexisted with humans.

He said: “These mummies were buried in human tombs, in sacred places.

“This means that they had coexisted with our ancestors, were not enemies and had, to a certain extent, a degree of respect between both races or cultures.”

Gaia.com claim tests show the bones to be 1,700 years old, and the beings had three fingers and elongated skulls.

For years there have been claims by alien conspiracy theorists that aliens visited our ancestors and helped them build great structures like the Pyramids of Giza and Stonehenge.

Mr Mera and Mr Fitzgerald say they have set out to get to to the truth, and will be releasing more findings.

In a press release, the pair said: “Recently, the internet exploded with images of newly discovered mummies, discovered in the region of Nazca, Peru.

“This is not the first time such earth shaking discoveries have been found, only to turn out to have a more mundane explanation.

“Could these recent findings be what we have been waiting for?

“We have recently returned from Peru after conducting a painstaking and thorough investigation that encompasses physical examinations of the bodies, scrutinising X-rays and scans, reviewing medical conclusions and being cast into the murky depths of the illegal black market.”