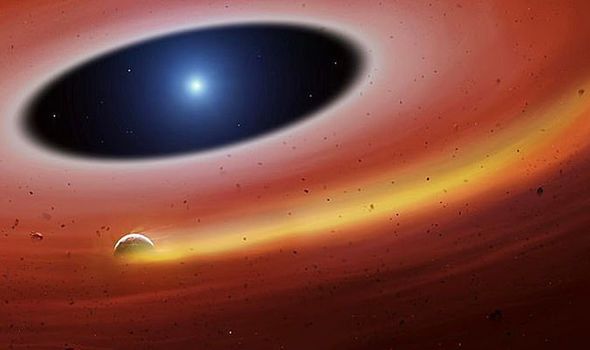 Astronomers have revealed that a PLANETARY fragment destroyed by the death of its star offers an apocalyptic prophesy into Earth’s future.

Earth has orbited the Sun at our solar system’s centre for 4.5 billion years. Our nearest star is responsible for life on Earth existing, due to the huge amount of energy it emits. Yet scientists have discovered the Sun will also play a role in Earth’s death, following the latest analysis of a planetary fragment 410 light years away.

The distant chunk of heavy metal continues its orbit around a collapsed star, dubbed SDSS J122859.93+104032.9, in the Virgo constellation.

And the small celestial object, spotted by University of Warwick researchers, is believed to be the remnants of a planet decimated by the death of its star.

Scientists have only witnessed evidence of such a planetary fragment circling a white dwarf star once before.

And their findings paints an apocalyptic prophesy of our planet’s future.

When a star is about to die, it expands, eating-up everything in its path.

In the Earth’s case, scientists say it most certainly will one day be destroyed as a result of the eventual death of the Sun.

Dr Christopher Manser, the study’s co-author said: “As stars age they grow into red giants, which ‘clean out’ much of the inner part of their planetary system.

“In our Solar System, the Sun will expand up to where the Earth currently orbits, and will wipe out Earth, Mercury, and Venus. Mars and beyond will survive and will move further out.

Some stars that reach the end of their life cycle exit in a more violent burst of energy called a supernova, an explosion that forms a black hole or a pulsar

While others continue to expand, consuming their hydrogen reserves until eventually all that’s left is a white dwarf.

Additionally, planetesimals orbiting dwarf stars could potentially collide with one another

This raises the possibility they could merge to form a new planet.

“After the white dwarf cools down further, such a planet could maintain balmy conditions for billions of years.

But although the thought of Earth sharing a similar fate is a ominous, mankind need not fret.

This is because estimates of the Sun’s longevity show our star will likely last another five to six billion years.

The team of researchers from the University of Warwick were able to spot the planetesimal using the cutting-edge Gran Telescopio Canarias, located off the coast of Africa.

A method called spectroscopy was used, involving shining a laser beam on high-pressure mixtures, then analysing the patterns of scattered light to reveal the structure of the object.

In this case, it marked the first time that scientists have used spectroscopy to discover a solid body in orbit around a white dwarf, according to the University of Warwick.

Professor Boris Gaensicke, a co-author of the study, said: “The planetesimal we have discovered is deep into the gravitational well of the white dwarf, much closer to it than we would expect to find anything still alive.

“If it was pure iron, it could survive where it lives now, but equally it could be a body that is rich in iron but with internal strength to hold it together, which is consistent with the planetesimal being a fairly massive fragment of a planet core.”