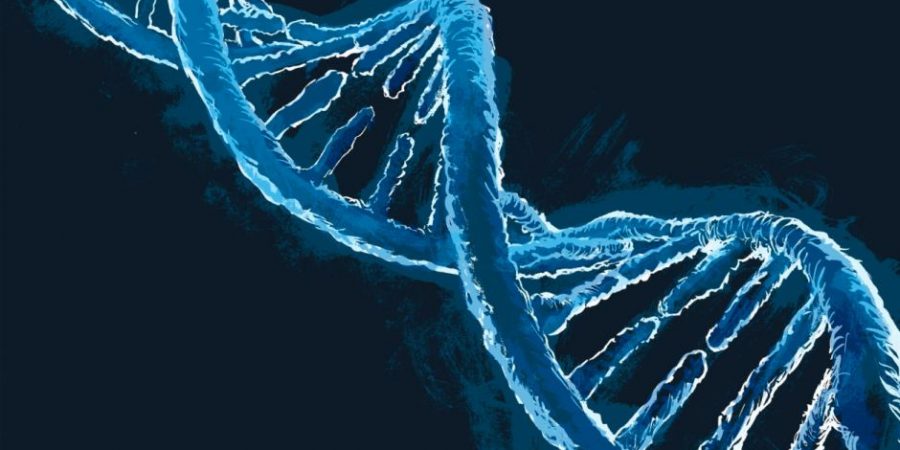 DNA, the hereditary material, may have appeared on Earth earlier than has been assumed hitherto. LMU chemists led by Oliver Trapp show that a simple reaction pathway could have given rise to DNA subunits on the early Earth. 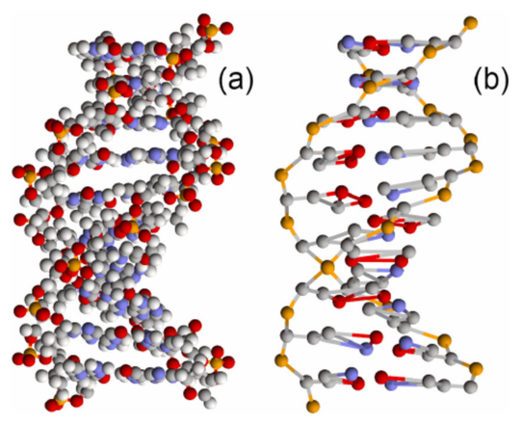 © Research Gate
View of a DNA fragment (CGTTTAAAGC) for (a) standard all-atom representation of the double helix and (b) the proposed coarse-grained model (12CG) based on 12 united atoms (grains) per base pair.

How were the building-blocks of life first formed on the early Earth? As yet, only partially satisfactory answers to this question are available. However, one thing is clear: The process of biological evolution that has given rise to the diversity of life on our planet must have been preceded by a phase of chemical evolution. During this ‘prebiotic’ stage, the first polymeric molecules capable of storing information and reproducing themselves were randomly assembled from organic precursors that were available on the early Earth. The most efficient replicators subsequently evolved into the macromolecular informational nucleic acids – DNA and RNA – that became the basis for all forms of life on our planet.

For billions of years, DNA has been the primary carrier of hereditary information in biological organisms. DNA strands are made up of four types of chemical subunits, and the genetic information it contains is encoded in the linear sequence of these ‘nucleosides’. Moreover, the four subunits comprise two complementary pairs. Interactions between two strands with complementary sequences are responsible for the formation of the famous double helix, and play a crucial role in DNA replication. RNA also has vital functions in the replication of DNA and in the translation of nucleotide sequences into proteins.

Which of these two types of nucleic acid came first? The unanimous answer to that question up to now was RNA. Plausible models that explain how RNA molecules could have been synthesized from precursor compounds in prebiotic settings were first proposed decades ago, and have since received substantial experimental support. Moreover, its conformational versatility allows RNA both to store information and to act as a catalyst. These insights have led to the idea of an ‘RNA world’ that preceded the emergence of DNA, which is now well established among specialists. How then were the first DNA subunits synthesized? The generally accepted view is that this process was catalyzed by an enzyme – a comparatively complex biomolecule whose emergence would have required millions of years of evolution.

But now a team of chemists led by LMU’s Professor Oliver Trapp has proposed a much more direct mechanism for the synthesis of DNA subunits from organic compounds that would have been present in a prebiotic environment. “The reaction pathway is relatively simple,” says Trapp, which suggests it could well have been realized in a prebiotic setting. For example, it does not require variations in reaction parameters, such as temperature. In Trapp’s experiments, the necessary ingredients are water, a mildly alkaline pH and temperatures of between 40 and 70°C. Under such conditions, adequately high reaction rates and product yields are achieved, with high selectivity and correct stereochemistry.

Each of the nucleoside subunits found in DNA is made up of a nitrogen-containing base and a sugar called deoxyribose. Up to now, it was thought that deoxynucleosides could only be synthesized under prebiotic conditions by directly coupling these two – preformed – components together. But no plausible non-enzymatic mechanism for such a step had ever been proposed. The essential feature of the new pathway, as Trapp explains, is that the sugar is not linked to the base in a single step. Instead, it is built up on the preformed base by a short sequence of reaction steps involving simple organic molecules such as acetaldehyde and glyceraldehyde. In addition, the LMU researchers have identified a second family of possible precursors of DNA in which the deoxyribose moiety is replaced by a different sugar.

According to the authors of the study, these results suggest that the earliest DNA molecules could have appeared in parallel with RNA – some 4 billion years ago. This would mean that DNA molecules emerged around 400 million years earlier than previously thought.