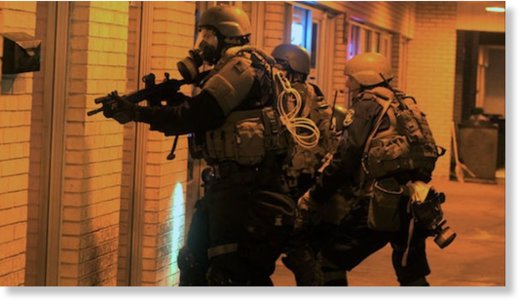 In the days following last year’s Charleston church shooting, in which nine African-Americans were murdered by a white supremacist, an armored vehicle rolled up to a modest home in nearby Richland County, S.C. Fifteen SWAT team cops in body armor jumped out and smashed the windows of the house.

“Can you do shit like that?” the homeowner asked one of the cops. “I mean, we gotta pay for the fucking windows? That’s some shit right there.” Acting on an anonymous tip about a drug lord, the police found less than a gram of weed in the bottom of a book bag and arrested the homeowner’s 22-year-old son, a student at nearby Denmark Technical College.

“He was supposed to be a drug kingpin. Come to find out he was there with his mom and dad, sister and her 4-month-old baby,” said filmmaker Craig Atkinson, whose new documentary, “Do Not Resist,” addresses the militarization of law enforcement. The film currently is playing in New York theaters and opens in Los Angeles Friday, with other markets to follow.

Such pointless raids were the norm rather than the exception in about a half a dozen ride-alongs on which Atkinson and his crew went. But while the cops found almost no drugs, they did seize $876 through a controversial policing practice known as civil asset forfeiture.

“It gives you a reason to enter the home and almost always there’s something you can seize within the home,” Atkinson said in an interview with Truthdig. “We’ve created a for-profit policing system,” said Atkinson, the son of a SWAT-team commander. “You’re sending SWAT teams into homes, and if they find anything, they get to keep it.”

According to Eastern Kentucky University criminologist Peter Kraska, there are 50,000 to 80,000 raids like this per year, up from 3,000 per year in the 1980s. The turning point came in the 1990s with the 1208 program, which authorized the Department of Defense (DOD) to transfer to federal and state police any weaponry and supplies “suitable for use by such agencies in counter-drug activities.” The 1208 was expanded into the 1033 Program in 1997, and the new policy gave police the right to asset forfeiture.

Overly aggressive tactics were stoked by the DOD’s 2013 decision to give MRAPs (Mine Resistant Ambush Protected vehicles) to local law enforcement agencies. Within a year, more than 600 MRAPs were distributed, along with 11,595 bayonets, 205 grenade launchers, 79,288 assault rifles and 479 bomb-detonator robots that have been distributed since 2006.

But asset seizure and the military buildup are only part of the problem facing innocent civilians. “We’re training officers to shoot as a conditioned response in the way Dave Grossman trains officers to do,” said Atkinson. He was speaking about retired Lt. Col. Dave Grossman, a top military- and police-training expert featured in “Do Not Resist.”

Grossman’s book “On Killing,” which tells how to overcome humankind’s innate aversion to killing others, is required reading at the FBI. “We are at war and you are the frontline,” Grossman tells a roomful of trainees in “Do Not Resist.” “What do you fight violence with? Superior violence. Righteous violence. Violence is your tool.”

Lawmakers such as senators Rand Paul (R-Ky.) and Claire McCaskill (D-Mo.) are seen grilling DOD and Department of Homeland Security personnel about a lack of accountability, although the hearing ends with no measures being taken. Laws recently enacted in Montana and New Hampshire do require a conviction before property can be seized, restoring the presumption of “innocent until proven guilty,” although a similar measure in New Mexico mostly has been ignored by police.

More disturbing is the movie’s final segment, which focuses on a growing trend in predictive policing and surveillance. LACER, a new program deployed by Los Angeles police, examines historical data to predict where crimes might happen next, in addition to compiling a list of likely future offenders based on past behavior. Not surprisingly, the ex-convicts and areas targeted happen to be predominantly nonwhite.

During the interview, Atkinson asked,“Why don’t we have white-collar stop-and-frisk? Why don’t we have a task force that opens the books of Wells Fargo?” He wonders about deep-seeded racial bias in law enforcement and the need to transform a warrior mentality into one that puts life first. “After all, that’s the goal—to protect and serve.”