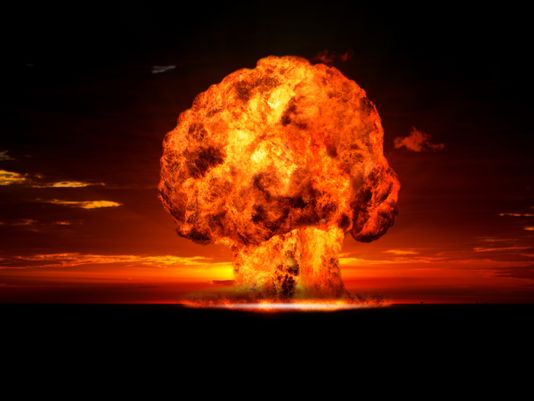 Scientists moved the hands of the Doomsday Clock closer to midnight on Thursday amid increasing worries over nuclear weapons and climate change.

Each year, the Bulletin of the Atomic Scientists, a nonprofit that sets the clock, decides whether the events of the previous year pushed humanity closer or further from destruction. The symbolic clock is now two-and-a-half minutes from midnight, the closest it’s been to midnight since 1953, when the hydrogen bomb was first tested.  Scientists blamed a cocktail of threats ranging from dangerous political rhetoric to the potential of nuclear threat as the catalyst for moving the clock closer towards doomsday.

“This year’s Clock deliberations felt more urgent than usual…as trusted sources of information came under attack, fake news was on the rise, and words were used by a President-elect of the United States in cavalier and often reckless ways to address the twin threats of nuclear weapons and climate change,” Rachel Bronson, the executive director and publisher of Bulletin of the Atomic Scientists, said in a statement.

While many threats played into the decision to move the clock 30 seconds forward from where it was in 2016, one person in particular prompted the scientists to act.

“Never before has the Bulletin decided to advance the clock largely because of the statements of a single person. But when that person is the new president of the United States, his words matter,” David Titley and Lawrence M. Krauss of the Bulletin wrote in an New York Times op-ed.

The Bulletin pointed to President Donald Trump’s  careless rhetoric on nuclear weapons and other issues as well as his troubling stance on climate change.

“Current political situation in the U.S. is of particular concern,” Titley of the Bulletin Science and Security Board said. “The Trump administration needs to state clearly, unequivocally it accepts climate change caused by human activity…There are no alternative facts here.”

Manhattan Project scientists, concerned about the first atomic weapons, founded the nonprofit Bulletin of the Atomic Scientists in 1945. They created the clock two years later, and update its minute hand each year.

This CEO got laser eye surgery to prep for an apocalypse

According to the group, the clock “conveys how close we are to destroying our civilization with dangerous technologies of our own making.”

The threat of nuclear warfare plays heavily into the time on the clock, as do the dangers of climate change the threat from cyber technology, according to the group’s website.

The decision is made by the board of the nonprofit Bulletin of the Atomic Scientists’  along with input from a board of sponsors which includes 15 Nobel Laureates, according to the group.