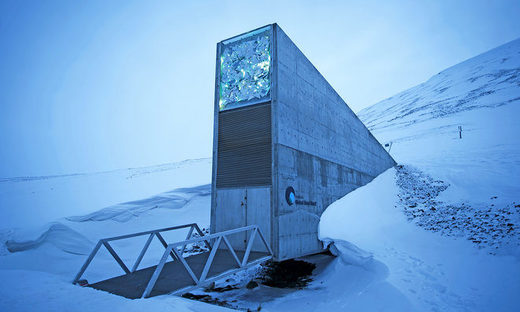 The Svalbard Global Seed Vault, located underground on a remote island in the Arctic Circle, is the world’s largest security storage for seeds.

The so-called doomsday seed vault located underground on a remote island in the Arctic Ocean has gained a neighbor, and the new vault, opened March 27, will act as a digital archive for the world’s data.

The underground Svalbard Global Seed Vault was built in 2008, about 620 miles (1,000 kilometers) from the North Pole. The frozen-storage facility houses the world’s most important crop seeds, acting as a backup for gene banks around the world and protecting the valuable genetic material from natural disasters, equipment malfunctions, war and other problems, according to Cary Fowler, a scientist, conservationist and biodiversity advocate who first envisioned the vault . Thus, the moniker “doomsday vault.”

Known as the Arctic World Archive, the vault will act as a library of sorts, a storage option for governments and scientific institutions, as well as companies and private individuals, to keep their data safe. Though the vault’s security is high-tech, the medium for the new data archive is analog — photosensitive film. (Whereas digital data is stored as discrete 1s and 0s, analog data refers to a continuous recording of physical signals, like a record player’s needle translating bumps and dips into music.)

Piql was founded in 2002 as a company that converted films from digital to analog. Now, the company is using their analog storage technique to take on data preservation for the world. Bjerkestrand explained that the data to be preserved would be sent to the film writers in the same way data is sent to an office printer, using a secure IT infrastructure (i.e., internet, VPN, or other data-transfer system). Once printed, the physical rolls of film cannot be edited, nor are they at risk of remote attacks (as digital data might be). According to Bjerkestrand, the films’ data is like “carved in stone.”

So far, the National Archives of Brazil and Mexico have sent data to be stored in the underground vault, Bjerkestrand said.

“In their case, [the deposit] is documents, different kinds of documents from their national histories, like, for example, the Brazilian Constitution,” Bjerkestrand said. “For Mexico, it’s important documents, even from the Inca period, which is a very important historical memory.”

But Bjerkestrand said the deposit could be any kind of data, from meteorological observations to manufacturing plans to classical literature.