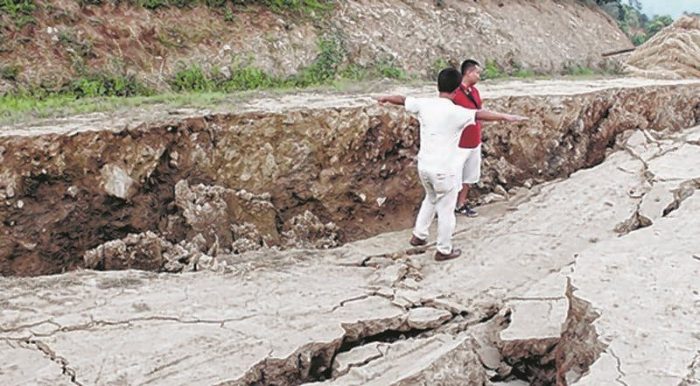 The earth crack at Kalikhola area in Kangpokpi district has already affected a stretch of 5 Km radius approximately with the fissure widening every passing hour while the more than 250 victims sheltered at the temporary relief camp are facing water and power shortage apart from other numerous difficulties.

While the earth fissure at Kalikhola area has widened today one house near the PMGSY road collapsed this morning while more paddy fields and huge trees have caved in and more land have slid down.

Two huge water bodies have been formed near Kalikhola village today while one electric post was also badly damaged.

The origin of the earth fissure is below J Songtun village and it slid down towards Kalikhola village developing larger fissure in the areas and has expanded to a radius of 5 Km approximately now.

The PMGSY road connecting IT road and Kalapahar via Makuli has also slid down about 300 metres from the original site.

All water pipelines have been badly damaged.

Interestingly, the funds which have been sought by the district administration for disaster management is reportedly yet to be received till today.

J Songtun village situated above Kalikhola village is in a more dangerous position in case a massive landslide occurs as it can be easily swept away.

Meanwhile, affected victims sheltered at the relief camp are facing various difficulties including shortage of drinking water and electricity.

Subhash Chhetry, secretary of Kalikhola village told media persons that out of 30 households members of 28 households are already sheltered in the relief camp while others are putting up at the places of their relatives and friends.

He also said that apart from many other grievances, they have no water to drink while the power supply is very erratic.

The district administration is likely to clamp 144 CrPC in the the area as preventive measure as many outsiders go to the spot everyday to see the earth fissure which is dangerous as nothing can be predicted and anything can happen anytime.