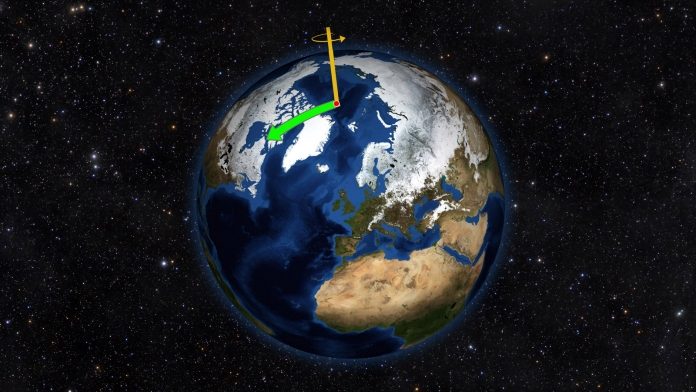 Climate change has contributed to the shifting of Earth’s axis of rotation, according to new research.

Earth’s geographic north and south poles—where the planet’s axis of rotation intersects with its surface—are not fixed. Changes in where the Earth’s mass is distributed can cause the axis, and the poles, to move.

Melting glaciers caused a significant amount of water to shift, which scientists have now said helped the locations of the poles accelerate eastward.

It is estimated that since 1980, the poles’ positions have moved about 4 meters (13 feet).

Melting glaciers accounted for most of the shift observed since the 1990s, the peer-reviewed study published in Geophysical Research Letters (the American Geophysical Union’s journal) said.

Pumping groundwater from beneath land had a lesser impact, it added. Natural factors, such as ocean currents, also contributed to the drifting pole positions, the study said.

Researchers analysed data from the Gravity Recovery and Climate Experiment (GRACE) satellites, which have tracked polar drift since 2002, with their own modeling before publishing the results.

The team was led by Shanshan Deng, from the Institute of Geographic Sciences and Natural Resources Research at the Chinese Academy of Sciences, with the project funded by the Chinese government.

Experts said they found the direction of the poles moved from southward to eastward in the mid-1990s and that the speed of the drift between 1995 to 2020 was upwards of 17 times faster than it was in the years between 1981 and 1995.

“The accelerated terrestrial water storage decline resulting from glacial ice melting is thus the main driver of the rapid polar drift toward the east after the 1990s,” the study read.

“This new finding indicates that a close relationship existed between polar motion and climate change in the past.”

The team said climate change was not the only factor in why the direction of the poles had shifted, but that it had contributed significantly over the observed period.

Vincent Humphrey, from the University of Zurich and not involved in the new study, said it showed how human activities have redistributed huge amounts of water.

“It tells you how strong this mass change is – it’s so big that it can change the axis of the Earth,” told The Guardian.

He added that the shifting of the Earth’s axis could change the length of a day by milliseconds, but was not large enough to affect daily life.

Tackling climate change once again has become a leading agenda for the White House since President Joe Biden took office in January.

Earlier this week Biden spoke about how he intended to tackle climate change with serious resolve. He said the U.S. “has resolved to take action” on the issue.

He added: “The signs are unmistakable, the science is undeniable and the cost of inaction keeps mounting.”

During his Earth Day proclamation, Biden said recent crises, namely the Texas snowstorms and storms in the Gulf of Mexico, had shown the threat posed by climate change.

He said: “That is why my administration is advancing the most ambitious climate agenda in our nation’s history.

“Our clean energy plan will create millions of good-paying union jobs, ensure our economic competitiveness, and improve the health and security of communities across America.

“By making those investments and putting millions of Americans to work, the United States will be able to cut our greenhouse gas emissions in half by 2030.”