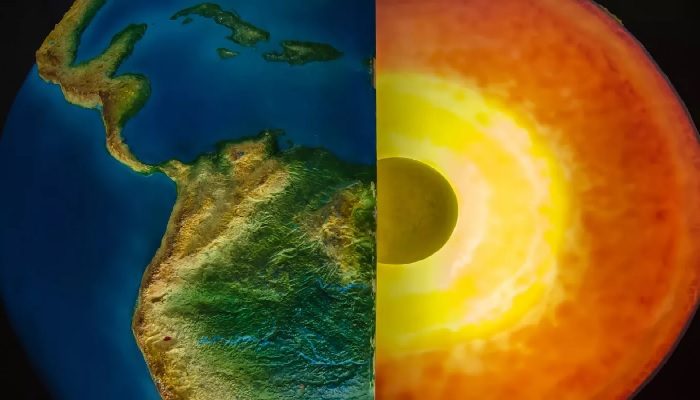 “…researchers Xi Yang and Xiaodong Song of Peking University, believe the inner core has actually paused its rotation process after looking at data that measured changes in both the waveform and travel time of seismic waves since the 1960s.”

by Mary Manley
via sputniknews

Researchers have cautioned that their findings aren’t necessarily marking the beginning of the end, instead urging that nothing overtly “bad” will take place in the near future.

Seismologists have published a study in the journal Nature Geoscience revealing what they believe to be the reversal of the Earth’s inner core, which could potentially affect the Earth’s own rotation.

In the study, researchers Xi Yang and Xiaodong Song of Peking University, believe the inner core has actually paused its rotation process after looking at data that measured changes in both the waveform and travel time of seismic waves since the 1960s.

While reviewing data they found officials determined that seismic waves showed little activity for about a decade until 2009, when the “temporal changes in the waveform shape simultaneously and consistently disappeared,” suggesting it stopped rotating completely.

Post 2009, the seismic changes further showed that those patterns predating the “pause” returned, but that the waves were crossing parts of the inner core, suggesting it was now rotating in the opposite direction. Song and Yang believe the inner core could oscillate with a roughly 70-year periodicity while switching directions every 35 years or so.

Those oscillations, they think, could help explain 60 to 70 year variations in the length of Earth’s days.

“We have those repeating earthquakes that happen at the same location,” Yang said. “It is like we are doing a CT scan for the Earth.”

If their hypothesis is correct, nothing “bad” should happen to life on planet Earth. The reversal shouldn’t affect Earth’s magnetic field so strongly the north pole and the south pole would flip, for instance, but it could shorten the length of the day by a fraction of a millisecond over the course of a year.

“It has effects on the magnetic field and the Earth’s rotation, and probably the surface processes and climate,” said Song. “Hard to say good or bad, but something to pay attention to as part of the Earth’s global change.”

“In theory it has been going on for a long time but we only have observations over a few decades,” Song added.

One researcher has cautioned the results of the study.

“The changes they noticed are valid although what’s actually happening isn’t so clear,” said John Vidale, a professor of earth sciences at the University of Southern California, who was not involved in the study. “They have a very good analysis and the theory they put in the papers is probably as good as anything at the moment, but there are several competing ideas as well.”

Vidale argues there is another theory in the geoscience community which says the inner core does change its rotation, but at shorter intervals than the 70-year cycle hypothesized by Yang and Song. “In all likelihood, it’s irrelevant to life on the surface, but we don’t actually know what’s happening,” says Vidale. “It’s incumbent on us to figure it out.”