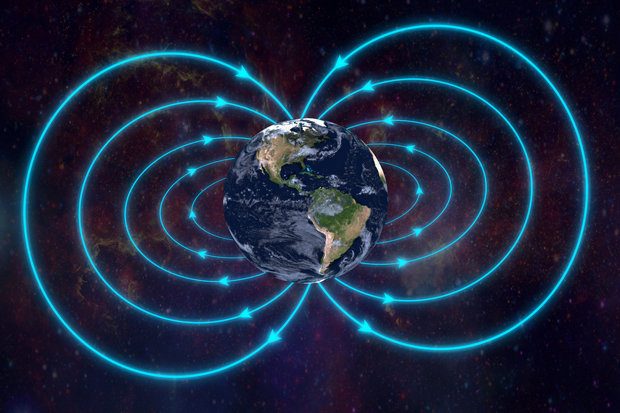 Updated | Historically, Earth’s North and South magnetic poles have flipped every 200,000 or 300,000 years—except right now, they haven’t flipped successfully for about 780,000 years. But the planet’s magnetic field is at long last showing signs of shifting. Although there’s no way to know yet for sure, it could be gearing up to flip once more, according to Undark Magazine. And that possibility is raising new speculation about what that means for planetary life.

Our planet’s magnetic field protects us from lethal levels of radiation from phenomena like solar rays. The dangerous particles never hit us directly, because upon entering the Earth’s atmosphere the magnetic field deflects them and forces them to move around, according to NASA. So the prospect of that field weakening, which it does when it’s getting ready to flip, is worrisome: It would leave us without sufficient protection.

The Earth’s magnetic field extends out from electrical currents created by the metals in its core, generating invisible lines that touch back down at the planet’s opposing magnetic poles. Cosmic radiation expert Daniel Baker, director of the Laboratory for Atmospheric and Space Physics at the University of Colorado, Boulder, believes that the next pole reversal could likely render some areas of the planet unlivable, according to Undark.

That devastation could arrive through multiple avenues. The combination of powerful space particles, like unfiltered solar rays, cosmic rays and ultraviolet B rays (the stuff your sunscreen bottle warns you about), would smash through our battered ozone layer and lead us the way of the dinosaurs.

Our infrastructure wouldn’t fare much better. Since satellite grids are linked, once radiation eats through, more will follow, causing a cascading mass blackout, among other disasters, according to Undark.

Because we haven’t reached that point yet, scientists are using imagery from satellites to track the magnetic field’s movements. Since 2014, Swarm—a trio of satellites from the European Space Agency—has allowed researchers to study changes building at the Earth’s core, where the magnetic field is generated.

Historically, Earth’s North and South magnetic poles have flipped every 200,000 or 300,000 years—except right now, they haven’t flipped successfully for about 780,000 years. But the planet’s magnetic field is at long last showing signs of shifting.
NASA

Their observations reveal that both the molten iron and nickel are draining out of the Earth’s core. That kind of restless activity could indicate that the field is preparing to flip, according to Undark. Protective measures could include building more radiation-fortified satellites, plus shoring up ones that are already operational, according to the International Business Times.

Not all of the Earth’s polarity reversal attempts are successful; the poles last put out a botched effort around 40,000 years ago, according to Futurism. Scientists have yet to establish a cause-and-effect relationship between pole reversals and mass extinctions, according to NASA. That doesn’t mean there isn’t one; just that we don’t know.

We might not know when the poles will finally complete their long-overdue switch, but we at least have the advantage of being able to prepare. And while the magnetic field would weaken, it would never disappear entirely. A weakened field might allow more radiation into our atmosphere than we’re used to, but it wouldn’t be deadly, according to NASA. It might even have a perk—a spike in aurora light displays at low latitudes.

This article has been updated to include additional information about pole reversals.