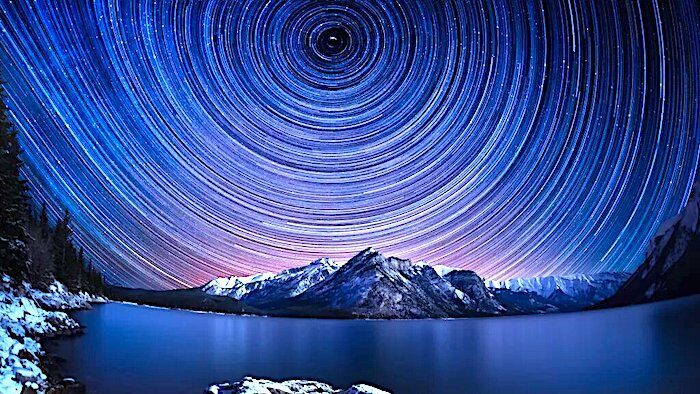 Earth’s Spin has Slowed, But We Still May Need a Negative Leap Second

“…Earth is no longer accelerating its rotation. But it is still spinning at a quicker rate than average.”

by Stephanie Pappas
via LiveScience
Headline Image Caption/Credit: Star trails over Alberta, Canada, captured as the Earth spins at night. Earth’s rotation has settled down since 2020. (Image credit: Nick Fitzhardinge via Getty Images)

After speeding up during 2020, Earth’s rotation has settled down. But timekeepers say we still may need a “negative leap second” in the next decade.

On average, each Earth day contains 86,400 seconds. But Earth’s rotation isn’t perfect; it varies slightly all the time depending on the movement of the core, oceans and atmosphere. Universal Coordinated Time (UTC), the official international timekeeping method, is based on the atomic clock, which measures time by the movement of electrons in atoms that have been cooled to absolute zero. Atomic clocks are precise and invariable.

So when Earth’s rotation and the atomic clocks don’t quite sync up, something has to give. When astronomical time, based on Earth’s rotation, deviates from UTC by more than 0.4 seconds, UTC gets an adjustment in the form of a “leap second.” Sometimes leap seconds are added, as last happened on New Year’s Eve 2016, when a second was added at 23 hours, 59 minutes and 59 seconds of Dec. 31. Scientists have added a leap second about every 18 months on average since 1972, according to the National Institute of Standards and Technology (NIST).

When seconds are subtracted, it’s known as a negative leap second. There has never been a negative leap second in international timekeeping, but 2020 raised the possibility that one might be needed. That year, Earth’s rotation sped up, breaking the previous record for shortest day, set in 2005, 28 times. The shortest day in 2020 occurred on July 19, when the planet completed its rotation 1.4602 milliseconds faster than the average of 86,400 seconds.

Now, according to Time and Date, Earth’s spin has simmered down. The first half of 2021 was still speedy, with the average length of a day clocking in at 0.39 milliseconds less than in 2020. But from July 1 to Sept. 30, the days lengthened to 0.05 milliseconds more, on average, than in 2020.

What that means, according to Time and Date, is that Earth is no longer accelerating its rotation. But it is still spinning at a quicker rate than average. Based on the current rate of rotation, a negative leap second might be required in about 10 years. The ultimate decision belongs to the International Earth Rotation and Reference Systems Service (IERS) in Paris.

Of course, the planet may have other ideas. It’s entirely possible that Earth’s spin will slow again, perhaps necessitating the addition of a second in the coming years instead of the subtraction. There’s no predicting it: Scientists aren’t sure what drives the long-term changes in Earth’s rotation.

“We’ve tried internally modeling things for the next two or more years,” Nick Stamatakos, one of the U.S. Naval Observatory representatives to the IERS Directing Board, told Time and Date. “But we run into trouble predicting more than six months or one year ahead.”

About the Author:
Stephanie Pappas is a contributing writer for Live Science covering topics from geoscience to archaeology to the human brain and behavior. A freelancer based in Denver, Colorado, she also regularly contributes to Scientific American and The Monitor, the monthly magazine of the American Psychological Association.