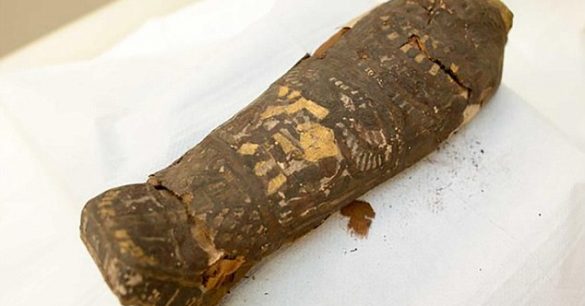 We analysed a piece that had initially been classified as ‘a mummified hawk with linen and cartonnage, Ptolemaic period (305 BC to 30 BC)’.

Samantha Harris, collections manager at the Maidstone Museum & Bentlif Art Gallery in Maidstone, Kent, England, was going through the museum’s collection of over 400 Egyptian artifacts when she came upon what was believed to be a mummified hawk. That’s not unusual – many mummified animals have been found in ancient Egyptian tombs. The hawk was associated with the god Horus, considered to be the Lord of the Sky and was also a symbol of the pharaohs, who were thought to be the personification of Horus. 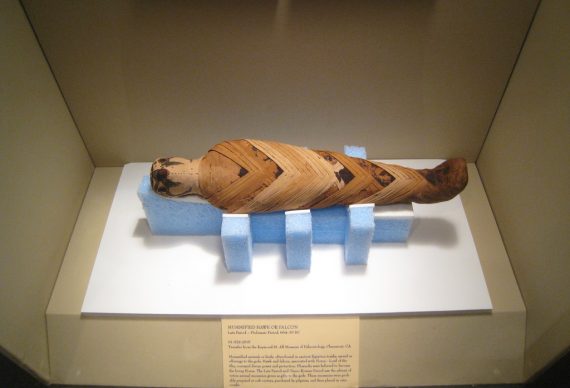 A mummified hawk on display

Harris took the small mummy to the Kent Institute of Medical Surgery Hospital where it was subjected to a CT scan. What they found was not a hawk.

“Following the scans at KIMS Hospital, the remains have in fact revealed it is the mummy of a baby.” 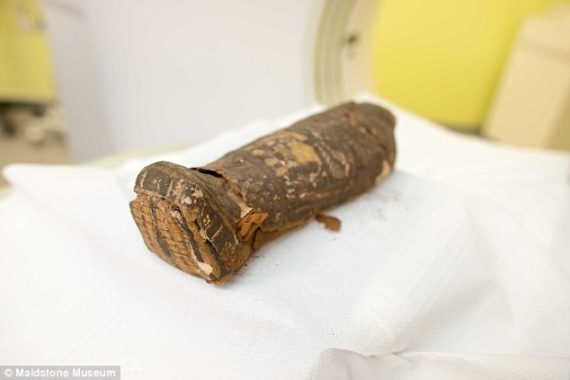 Further analysis determined that the “baby” was actually a miscarried fetus. A few mummified fetuses have been found recently in other collections, but this one – aside from the fact that it had been thought to be a hawk – is significant.

“Initial reviews identified the baby to be a miscarried 20-week gestation foetus which, if found to be the case, will be one of the youngest human mummies recorded anywhere in the world.” 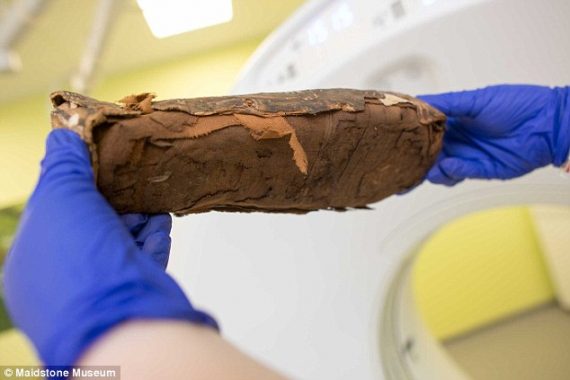 The research is being conducted as part of a Heritage Lottery funded redevelopment of the Maidstone Museum’s Ancient Civilizations gallery. At the time the mummified fetus was discovered in late November, attention was focused on a young adult mummy named Ta-Kush who was thought to be 14 – making her one of the youngest mummified adults ever found – but was determined to instead be well into her 20s when she died.

Now speculation has turned to the other misdiagnosed mummy. One theory is that the fetus was the result of an illicit affair by a pharaoh that was hidden from the public yet buried ceremoniously as a possible offspring of a pharaoh. This would not be surprising since the Ptolemaic period included twelve male pharaohs named Ptolemy and a few females named Cleopatra, including the most famous one, with a number of marital variations and scandals.

The mummified fetus has not been linked to any particular pharaoh and it will not be unwrapped so that a DNA analysis can be conducted. It will be put on display this summer when the museum’s Ancient Egyptian collection is unveiled.