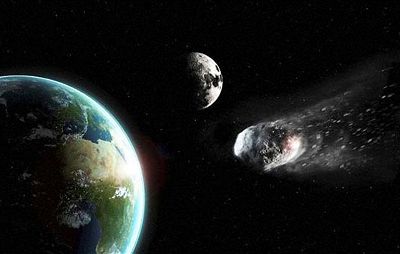 A massive asteroid flying by Earth on 2015 Christmas Eve has scientists on edge. While NASA is downplaying the threat to human life and property, conspiracy theorists and several experts say space rock 2003 SD220 is larger than believed and has the potential to cause deadly earthquakes and eruptions from dormant volcanoes.

According to a Sun report, the Christmas Eve asteroid is one of at least 10 rocky bodies in space that are considered “potentially hazardous” to Earth. According to an internal report, NASA officials say it measures about 1.5 miles wide and is moving at 5 miles per second.

“Little is known about the remaining 10 high-priority targets other than the absolute magnitudes and their heliocentric orbits that make six of them potentially hazardous to Earth.”

In a separate report, Paul Chodas, manager of NASA’s Near-Earth Object Office at the Jet Propulsion Laboratory in Pasadena, California, issued a statement on the widespread rumors.

“There is no scientific basis — not one shred of evidence — that an asteroid or any other celestial object will impact Earth on those dates.

“If there were any object large enough to do that type of destruction in September, we would have seen something of it by now.

Sources say the asteroid flyby on Christmas Eve poses little threat as it will only come within 6.7 million miles to the planet. By comparison, that’s 28 times the distance from here to the moon. Further, you’ll need a telescope to view the chunky body.

Extraterrestrial collusion theorists who believe in a Planet X or Nibiru, are not convinced of the recent announcement that downplays potential threats of an impact.

Cosmic naysayers believe the asteroid is, at least, four times the size of Jupiter, the largest planet in our Solar System. They think it will fly by the planet by year’s end and destroy all life forms due to its inescapable gravitational pull.