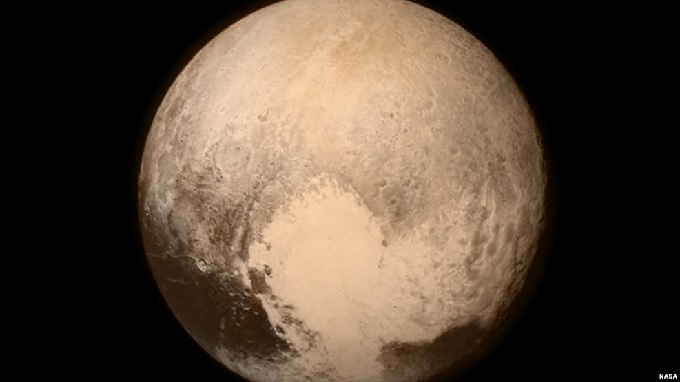 Pluto, demoted from full planetary status a decade ago, continues to surprise and astonish researchers who are sifting through data from the New Horizons‘ recent fly-by.

New Horizons is the NASA mission, launched in 2006, that made a close approach to Pluto in July, giving researchers stunning views and unprecedented amounts of information about the dwarf planet.

New research being published in today’s Nature magazine is focused on the heart-shaped surface feature that researchers first saw when New Horizons sent back close-ups of Pluto.

That region is called the Tombaugh Regio, and it caught researchers’ eyes not only for its unusual shape but also because it aligns almost exactly opposite of Pluto’s largest moon, Charon.

This has puzzled astronomers for a long time because it’s really unlikely that the Tombaugh Region and Charon would just randomly get locked into a gravitational tug of war that would have ended up with them in near-perfect alignment.

So astronomers went looking for something they call a “gravitational anomaly” — basically something heavy — that would have matched up Charon and Tombaugh Regio.

VOA spoke about it with Richard Binzel, MIT professor of earth, atmospheric and planetary sciences. In announcing his new research, he said: “The New Horizons data say it’s (the tombaugh region) not only opposite Charon, but it’s really close to being almost exactly opposite. So we asked, what’s the chance of that randomly happening? And it’s less than 5 percent that it would be so perfectly opposite. And then the question becomes, what was it that caused this alignment?”

Turns out that when you do the math, the only thing that explains that kind of alignment would be a big heavy ocean of liquid water. That’s right, it’s likely that Pluto has now joined the ever-growing list of planets, moons, dwarf planets and exoplanets in our solar system to have oceans of liquid water.

So far there’s evidence of water on the exoplanet Ceres, three of Jupiter’s moons (Europa, Ganymede and Callisto), three of Saturn’s moons (Titan, Enceladus, and Mimas), and one of Neptune’s moons (Triton).

And there’s clear evidence Mars once had a giant ocean that covered nearly 20 percent of the planet.

But how did an ocean form on Pluto? Researchers think that part of Tombaugh Regio, called the Sputnik Planitia, is a giant impact basin. Binzel suggests that Pluto’s crust is probably extremely thin in this region, allowing what’s left of the planet’s interior heat to reach the surface.

“Pluto is small enough that it’s just about almost cooled off but still has a little heat, and it’s about 2 percent the heat budget of the Earth, in terms of how much energy is coming out,” Binzel explained. “So we calculated Pluto’s size with its interior heat flow, and found that underneath Sputnik Planitia, at those temperatures and pressures, you could have a zone of water-ice that could be at least viscous. It’s not a liquid, flowing ocean, but maybe slushy. And we found this explanation was the only way to put the puzzle together that seems to make any sense.”

That’s a lot of water out there in our solar system, and Binzel says that’s likely because the ingredients are pretty common. “… hydrogen and oxygen are the two most abundant compounding elements in the universe, so perhaps we should not be so surprised. This is another example where exploring far away brings us to greater fundamental understanding of our own backyard.”

Scientists have been looking for water mainly in the so-called “Goldilocks zone” where the sun’s energy keeps a planet’s surface temperature just right: not too hot to boil away water, and not too cold that any water is just ice.

But it turns out that volcanic activity and the pushing and pulling of gravity are keeping stellar bodies warm enough for liquid water to exist outside the Goldilocks zone, though most of the liquid water, like the new ocean on Pluto, would have to exist under the surface, or under a layer of ice.

Still the idea is exciting to Binzel who says, “We are in a new era where water seems to be more prevalent than we had previously thought.”

And let’s not forget the old NASA mantra: that where there is water, there could be life.

So, does this mean that Pluto, the wanna-be planet, might have life on it?. Binzel won’t speculate other than to say “the NASA philosophy of ‘follow the water’ to explore traces of life would lead us to say that it is not impossible, even if highly unlikely.”

Still, we can hope.