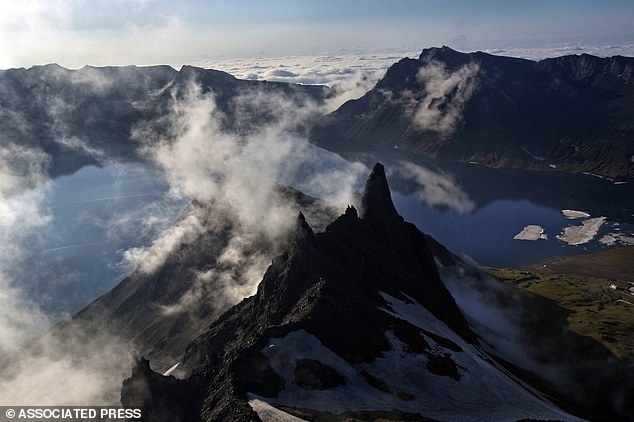 A team of South Korean scientists say North Korea’s nuclear tests could cause a volcanic eruption at Mount Baekdu near the test site and this hypothesis has been proven with a simulation. The mountain last erupted in 1903.

The research team led by Hong Tae-kyung, a professor of seismology at Yonsei University in Seoul, has written a paper stating the pressure of a 7.0 seismic event caused by an underground nuclear explosion test near the active volcano could trigger a volcanic eruption. The paper was published in the internationally-recognized journal, Nature’s Scientific Report.

The research team calculated the estimated seismic response and pressure changes in the surface and the magma chamber of the mountain in case of underground nuclear explosions with magnitudes of between 5.0 and 7.6 on the Richter scale, using data of the North’s previous nuclear tests and compared them with the size of nuclear tests conducted in the Soviet Union and the U.S. in the past.

The study showed both the peak ground acceleration and the ground speed increase linearly alongside increasing magnitudes of nuclear explosions. In particular, nuclear explosions with a magnitude of 7.0 could cause dynamic stress changes of up to 120 kilopascals and this in turn could trigger a volcanic eruption depending on the underground structure and magma filling, the professor said.

Mount Baekdu is estimated to have magma chambers in the area 5 to 35 kilometers below the mountain surface around a large caldera lake on the summit. This magma exists along the direction toward Hamgyeongbuk-do. The proximity of the North’s nuclear test site Punggye-ri is 116 kilometers from the mountain, a distance that can be affected by a seismic wave.

Experts now need more information of the mountain to fathom how much magma exists in the chamber, arguing further studies are imminent.