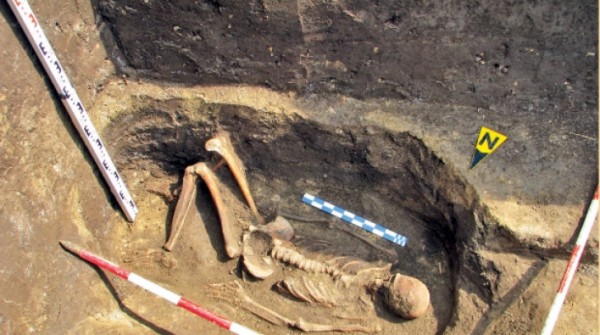 Romania is known for the tales of giants who lived across the country. Many pieces of evidence prove that Romanian tales about the giants are true.

Depending on the region of Romania where the legends come from, there are different names for giants. In the Boziorul area, giants are known as “tartars” (“tartari”), for example.

Known by the name of “The Hyperborean Gallery” or “Gallery 13”, the place of this amazing discovery is located beneath Cornea village. A number of other discoveries were made at the site in 1976.

However, in the name of “security” the anthropological and archeological discoveries were deemed too unusual and shocking for the time, so the gallery was permanently sealed.

The gravestone was not the only unusual item found inside the gallery. On it, archaeologists found a 10 meter (32.8 ft.) tall skeleton of a giant. Apparently, the giant had been buried there after his death, with his legs gathered on one side.

Lacking the proper equipment necessary to analyze such a find, the skeleton was sent to Moscow. Unfortunately, nothing has been reported about the giant ever since.

As for the tombstone, a new series of research was planned to analyze it in 2012. The relic was dug up once again and measurements showed that it was six meters (19.7 feet) wide, twelve meters (39.4 feet) long and three meters (9.8 feet) tall.

It weighed almost 1700 tons and contained somewhere around 900 tons of solid gold. To make a comparison, such a quantity of gold would have required over twenty years of mining work to gather.

The last thing known about the gravestone is that it had been cut up into 80 smaller pieces in order to make its transportation possible. As for its destination, it is not known where it lies today.

During the excavation, the lifting of the gravestone also revealed the entrance to a pit. The four meter (13.1 feet) diameter pit had a descending spiral stairway and a milky violet light radiated from the inside.

A closer inspection of the stairs made it clear that they looked as if cut into the walls of the pit by a laser and, as for the violet light, nobody could determine its source.

Curious to find the source of the light and to see what was inside, the paleolinguist descended into the pit, but nobody else proved brave enough to join him. The night passed and the man never returned from the pit.

Ultimately, the army sealed the entry to the pit, as well as the entire Gallery 13, with cement. Those present never talked about the discoveries again – as they had been made to sign confidentiality agreements, therefore what lies beyond the staircase of the pit remains a mystery.