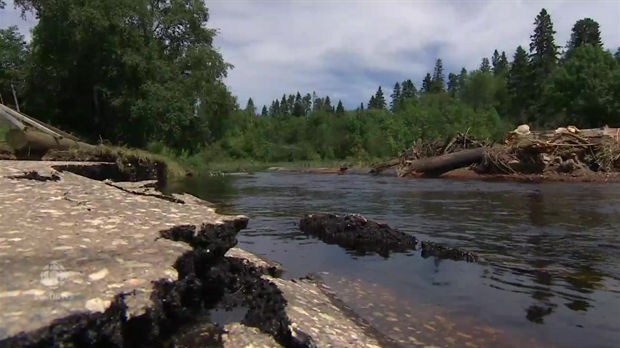 Stan Michalak can still vividly remember when his dad came home sick and injured after something happened in the Falcon Lake woods in Manitoba on the May long weekend of 1967.

It was something that put his family life into upheaval and remains one of the world’s best-known UFO encounters.

“I recalled seeing him in bed. He didn’t look good at all. He looked pale, haggard,” said Michalak, who was nine years old at the time and was allowed to see his dad for a couple of minutes on the day after what soon become known as the Falcon Lake incident. 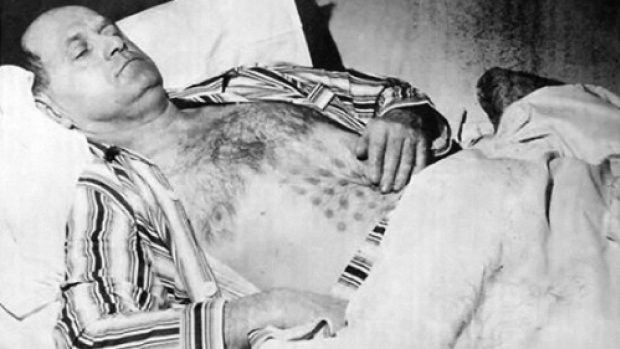 Stefan Michalak was treated at a hospital for burns to his chest and stomach that later turned into raised sores on a grid-like pattern.

Then there was the smell.

“When I walked into the bedroom there was a huge stink in the room, like a real horrible aroma of sulphur and burnt motor. It was all around and it was coming out of his pores. It was bad,” said Michalak, who co-authored the book When They Appeared with Winnipeg UFO researcher Chris Rutkowski. 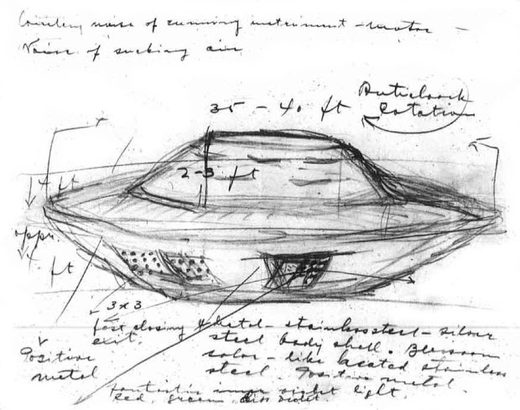 Stefan Michalak’s sketch of the strange craft he encountered.

The book will be launched on Saturday in conjunction with the 50th anniversary of the incident.

“I was very afraid. My dad had been injured and I didn’t know anything about it,” Michalak told CBC News in recalling that Saturday 50 years earlier.

Within a couple of days, however, not only did he know more – so did much of the public.

The story about his dad being burned by a UFO ran in the Winnipeg Tribune newspaper “and that’s when everything pretty much hit the fan,” Michalak said.

Stefan Michalak was an industrial mechanic by trade and an amateur geologist who liked to venture into the wilderness around Falcon Lake – about 150 kilometres east of Winnipeg – to prospect for quartz and silver.

He had staked some claims the prior year and set out on the May long weekend in 1967 to explore some more.

On May 20, 1967, Stefan was near a vein of quartz along the Precambrian Shield in the area when the 51-year-old was startled by a gaggle of nearby geese that erupted into a clattering of honks. 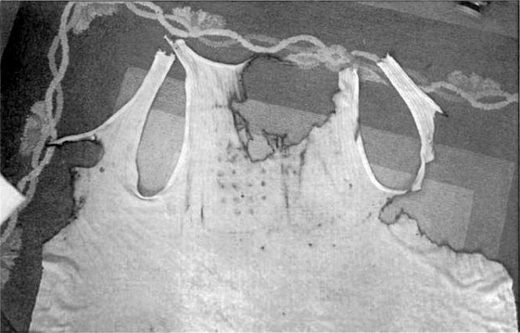 A grid of dots can be seen on Stefan Michalak’s burned shirt.

According to his accounts, as reported in newspapers at the time and since repeated in books, magazines and on TV shows like Unsolved Mysteries, Stefan looked up and saw two cigar-shaped objects with a reddish glow hovering about 45 metres away.

One descended, according to Stefan’s account, landing on a flat section of rock and taking on more of a disc shape. The other remained in the air for a few minutes before flying off.

Believing it to be a secret U.S.military experimental craft, Stefan sat back and sketched it over the next half hour. Then he decided to approach, later recalling the warm air and smell of sulphur as he got closer, as well as a whirring sound of motors and a hissing of air. 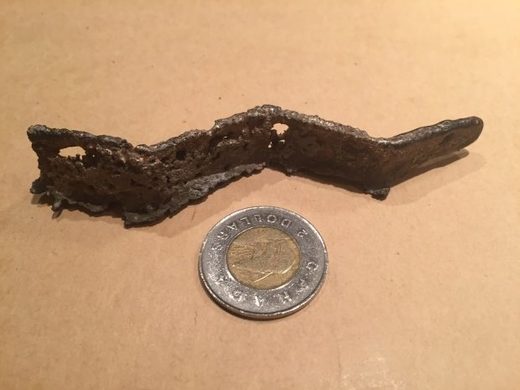 A piece of the radioactive metal that was retrieved from the crash site in 1968. It was found in the cracks of the Precambrian rock.

He also noted a door open on the side with bright lights inside, and said he heard voices muffled by the sounds from the craft.

He said he called out, offering mechanical help to the “Yankee boys” if they needed it. The voices went quiet but did not answer, so Stefan tried in his native Polish, then in Russian and finally in German.

Only the whirr and hiss of the craft responded.

He claims he went closer and noted the smooth metal of the ship, with no seams. He then looked into the bright doorway, pulling on the welding goggles he used to protect his eyes while chipping at rocks during prospecting.

Inside, Stefan said he saw light beams and panels of various-coloured flashing lights, but could not see anyone or any living thing. When he stepped away, three panels slid across the door opening and sealed it.

He reached to touch the craft, which he said melted the fingertips of the glove he was wearing.

The craft then began to turn counter-clockwise and Stefan says he noticed a panel that contained a grid of holes. Shortly afterward, he was struck in the chest by a blast of air or gas that pushed him backward and set his shirt and cap ablaze.

He ripped away the burning garments as the craft lifted off and flew away.

Disoriented and nauseous, Stefan stumbled through the forest and vomited. He eventually made his way back to his motel room in Falcon Lake then caught a bus back to Winnipeg.

He was treated at a hospital for burns to his chest and stomach that later turned into raised sores on a grid-like pattern. And for weeks afterwards, he suffered from diarrhea, headaches, blackouts and weight loss.

‘It just flipped our lives over’

Once the story was out, the RCMP, the air force, the media, various government agencies, and hordes of gawking members of the public descended on the Michalaks’s small River Heights bungalow in Winnipeg.

That’s who Michalak refers to in the title of the book – those endless visitors and phone calls, the media and people camping on the lawn, the people who would follow Michalak to school one day peppering him with questions.

“It just flipped our lives over,” he said. “It took several years before it finally died down.”

After that, and until the day he died in 1999 at the age of 83, Stefan believed he never should have said a thing, Michalak said.

But at the time, he felt it was a duty. He wanted others, if they were to see the same thing, to avoid it and not get hurt, Michalak said.

In Poland, before Stefan moved his family to Canada, he was a military policeman with a set of moral guidelines that he lived by – that is, if something happened, it should be reported, Michalak said.

In addition to constant probing from authorities, the family endured condemnation and criticism in the public, Stefan’s sanity was questioned and Michalak was bullied in school.

Though he wished he hadn’t said anything, Stefan never backed away from the story, either. He also never claimed to have seen aliens and still considered it a secret military craft.

“If you asked him what it was he saw, he could describe it in intimate detail but he would never say, ‘Oh, it was definitely extraterrestrials,’ because there was no evidence to prove that,” said Michalak.

“He might ask, ‘What do you think I saw?’ but right up until he died, his story never changed one iota – nothing about it or how he told it.”

In all those years since and with some 300 pages of documentation on the encounter, “there’s nothing so far that has flawed his story,” Michalak said.

So what does he think?

“I’m not so close-minded that I can’t entertain the possibility that it’s otherworldly. I can’t discount that. But without specific evidence to show me that it is, I don’t know,” Michalak said.

“What I can tell you is that I’m an aviation fanatic, a huge aviation buff, and I am very familiar with how aviation technology has advanced in the past 50 years. And there was nothing even close to that in the works anywhere at that time.”

The case was investigated intensely by a number of levels of government and the official conclusion, even from the United States Air Force, was that the case was unexplained, Rutkowski noted.

“It even beats Roswell [the alleged flying disc that landed in New Mexico in 1947] because the United States still doesn’t recognize that anything happened in Roswell out of the ordinary.”

Items were later retrieved from the encounter site, including Stefan’s glove and shirt and some tools, which were subjected to extensive analysis at an RCMP crime lab. No one could determine what caused the burns.

At the landing site was a circle about 15 feet in diameter, devoid of the moss and vegetation growing in other areas of the same rock outcropping. Soil samples, along with samples of clothing, were tested and deemed to be highly radioactive.

So were pieces of metal that were chipped out of cracks in the rock about a year after the incident. The metal had somehow been melted into the cracks.

Many of the items have long since been lost as they were transferred through various authorities and agencies. However, Rutkowski and Michalak still have one of the pieces of metal, which remains radioactive.

Still sick in 1968 with recurrences of the burns showing up on his chest and suffering from blackouts, Stefan went to the Mayo Clinic in Rochester, Minn.

Doctors did a thorough investigation and even sent him to a psychiatrist “who came back with the report that this is a fellow who’s very pragmatic, very down to earth – pardon the pun – and does not make up stories,” Rutkowski said.

“If Dad hoaxed this – remember we’re talking about a blue-collar, industrial mechanic – if he hoaxed it then he was a freakin’ genius,” said Michalak.