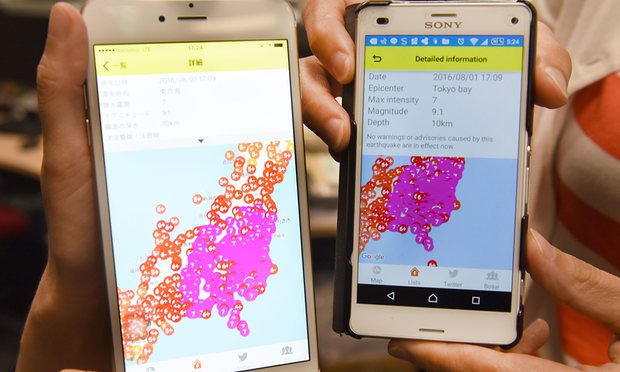 ‘I prepared to die,’ one person tweeted after erroneous alert said magnitude-9.1 quake had struck

An erroneous alert that a massive earthquake had hit the Tokyo area sent many people in Japan into a brief panic on Monday and disrupted some train services.

The Japanese Meteorological Agency sent the alert just after 5pm, saying a magnitude-9.1 quake had struck. It cancelled it seconds later but that wasn’t fast enough to stop at least one smartphone app passing the warning on.

But the expected tremor never came and the agency’s alert set off alarmed chatter on Twitter.

“When I saw the Yurekuru app screen, I prepared to die,” read a tweet in Japanese from one user. “Yeah okay this was fake but it scared the hell out of me,” said another in English.

Japan’s Meteorological Agency said it had sent the alert but its cancellation just seconds later had not reached some app operators in time. An agency official said the reason for the withdrawn alert may have been lightning hitting a seismograph, an instrument that monitors quakes.

Some Tokyo train services shut down temporarily following the alert.

Japan is among the most quake-prone countries in the world. A magnitude-9 quake off the country’s north-east coast in March 2011 set off a giant tsunami that killed more than 18,000 people and sent three nuclear reactors into meltdown.

Yurekuru is among the most popular of the disaster warning apps that dramatically increased in popularity after the 2011 quake and tsunami and its operator says at least 5 million people have downloaded it.

Japan sits at the junction of four tectonic plates, but most earthquakes, even moderately strong ones, do little major damage nowadays thanks to rigid building codes. –THE GUARDIAN