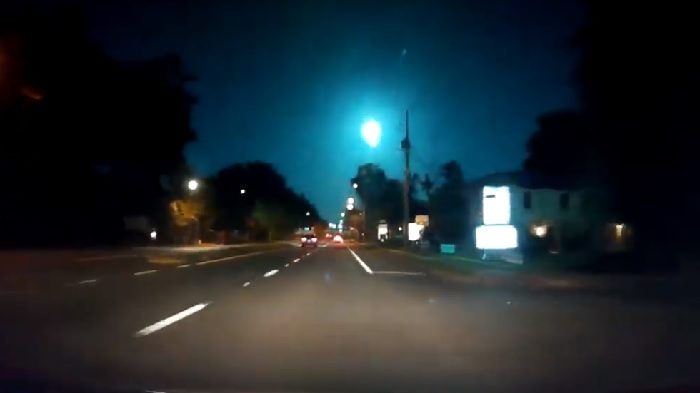 A large green meteor was spotted blazing through the night sky in northern Florida Saturday night, and several dashboard cameras managed to capture the fireball in action.

The bright teardrop-shaped meteor fell at about 11:55pm EST and eyewitnesses reported a five to six second descent, followed by a bright flash that lit up the sky like a firework.

The National Weather Service in Tallahassee said the fireball was picked up by a weather device used to track lightning in thunderstorms. The agency said they were still working to determine where the meteor may have landed, though it’s possible that it broke up in the atmosphere prior to making impact.

Several eyewitnesses took to social media to share the rare sighting. A meteor is a piece of space rock that has broken off an asteroid or comet orbiting the Sun and as it enters Earth’s atmosphere it burns up, creating a fiery tail that can resemble a shooting star.

11 55 pm EST
A fire ball, shaped look ike a tear drop
Sharp Incidence angle 50 degrees
Noticed it at a siderial elevation of 40 degrees high in the sky
May be an 8th of a full moon insize
5 to 6 seconds descent
Bright like a firework

Wonder what it is#meteor may be

In #Florida around the #Minneola area. Just saw what appeared to be a #Meteor shooting straight down? Very weird….

DID YOU SEE IT?! just saw a HUGE green flash go across the sky looking south from just west of Savannah. Could have been a meteor?! @NWSCharlestonSC @NWSJacksonville @NWSTallahassee